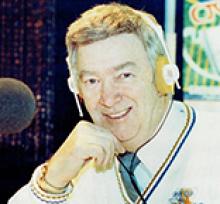 ROBERT (BOB) PICKEN, O.M. September 24, 1932 - January 30, 2019 WOW! Wasn't that a life! I have many reflections on my life, full of gratitude for many great experiences, meeting so many wonderful people around the world and across this wonderful country. I have no regrets for 86 superb years that started in Winnipeg's North End. I had some ups and downs over the years, but wound up with a very positive feeling about what I have accomplished and what I leave behind. I have had two excellent marriages, the first of which produced my three children that have given me so much pride for all their talents and accomplishments. The ups of my life, for the most part, centered around sports. As a hockey and baseball player, starting with participation on our backyard hockey rink and miniature golf course, and reaching a modest ultimate in winning the Manitoba Juvenile Baseball championships as a catcher with the Elmwood Giants in 1951. I ventured into umpiring in the next years, became an executive as Umpire-in-chief of Minor Baseball, and eventually the Minor President. Along with Sam Fabro and many others, we brought the National Junior Championship to Winnipeg, and guided the baseball committee for the 1967 Pan American Games. As a bantam hockey player, I was something NOT to be admired, but I had the privilege of playing briefly on a forward line with Hall of Fame member Andy Bathgate on Vince Leah's Excelsior Bantams. I played my first actual golf game in 1945 with my Dad and brother Hugh after he returned from army service overseas. We played on the sand-green Bourkevale Course in St James. Later my long time buddies, Laurie Artiss and Eddie Dearden enticed me to try playing at Polo Park, Kildonan, Windsor Park, and the Grey Owl Tournament that Laurie had created at Clear Lake. The Grey Owl became a very special event for me. It had competition, as well as fellowship and a true sense of camaraderie. I made a multitude of friends at Clear Lake, both on the Grey Owl Tournament Board and on the golf course. I had many happy times in golf, worked well with Golf Manitoba and was honoured to be inducted into the Manitoba Golf Hall of Fame. It's one of nine shrines or rolls of honour to select me - Canadian and Manitoba Curling Halls of Fame, Manitoba Baseball and Hockey Halls of Fame, MSSA Media Roll of Honour, Winnipeg Football Club Media Roll of Honour, CFL Football Reporters of Canada Media Hall of Fame, World Curling Hall of Fame (a conversion from the Elmer Freytag Award), and Manitoba Golf Hall of Fame and Museum. My career as a broadcaster has taken me all over the world, to exotic places like Sapporo, Japan and my personal, exceptional, favourite location Garmisch-Partenkirchen, Germany where I attended three World Curling Championships. I also have been fortunate to cover Olympic Games in France, Austria, Calgary and Montreal. A final individual honour came my way in July, 2017 when I was presented with the 'Order of Manitoba' at the Legislature and Government House. As mentioned previously, I have been blessed with an excellent family, who have been very successful in their own right. My first son, Shane (Heather) has developed a social services agency in Kelowna, BC. My daughter Kelly (Sandy), after an outstanding basketball career, turned to school teaching and has become a Principal at an elementary school in Ontario. My youngest son, Bob Jr. (Deb) is a graduate MBA/LLB and now works for Sterling Crane in Edmonton. They share a summer cottage at Ingolf, Ontario which was provided to them by their mother, Doreen Smith (nee McNicol). I am proud to have a relationship with the family of my father in Northern Ireland and we were able to visit with them a number of times over the years. I also have my brother Hugh's children who played host to Barbara and I many times in Eastern Canada. Most importantly, for many years I have been blessed with the love and attention of my second wife Barbara, who has led the way in making the last 34 years of my life the happiest that any man could rightfully expect. I am survived by my beloved wife Barbara, son Shane (Heather), daughter Kelly (Sandy), son Bob (Deb), six grandchildren and one great-grandchild, as well as Barbara's family. Thank you to the paramedics for their excellent care and to my doctors and their clinic nurses; thank you to the home care and the palliative care team for their support and guidance over the last few months. Flowers gratefully declined, but if you wish, a donation to a charity of your choice, or to CancerCare Manitoba, 675 McDermot Avenue, Winnipeg, would be appreciated by the family. A celebration of my life will be held on Wednesday, February 6 at 2:00 p.m. at Chapel Lawn Funeral Home, 4000 Portage Ave.