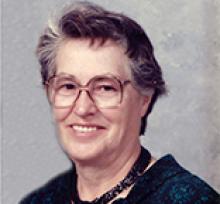 ELSIE ROEHL June 27, 1929 - January 29, 2019 It is with great sorrow that we announce the passing of Elsie Brunhilde Roehl (nee Berndt). Elsie peacefully passed away, with her family at her side, at the age of 89 years, at the Gilbert Plains Health Centre. Elsie will be missed and remembered by her husband of 65 years, Henry; son Garry (Deborah); daughter Linda (Brian) Sharpe, and daughter-in-law Ann; six grandchildren, Scott (Kristen) Roehl, Katelyn (Patrick) Wideman, Adam (Jenn) Sharpe, Matthew Sharpe, Christopher Roehl and David Roehl; two great-grandchildren, Ascher and Greyson, as well as nephews and nieces. Elsie was predeceased by her son Allan, parents, Gottfried and Mathilda (nee Schmidt) Berndt, brothers, Frederick (Willie), Herman and Arnold, and sister Helen. Elsie grew up on the family homestead west of Moosehorn in the New Home District. Early in 1950 she met a young ball player, Henry, who played for the Moosehorn Hardball Team. In 1953, Elsie married Henry and they moved to Faulkner. In 1956 Henry and Elsie moved to Fairford and lived there for 57 years, until October 2013. It was here that Mom and Dad raised their three children. Mom was actively involved in operating their rural store, Fairford General Store, served as postmaster assistant and helped on the family hobby farm. On days when Dad would travel to Winnipeg for groceries and other business supplies, Mom was in charge of the entire family operation which involved selling groceries, hardware, and gas; distributing mail; making sure the cattle were taken care of and many more responsibilities. Mom lived the early years of her life as a pioneer with no electricity, telephone, or indoor plumbing, with wood heat and simple hand operated machines. Her clothes dryer was a clothesline and the great outdoors. Mom enjoyed gardening, baking and cooking. Mom could quickly put together a hearty and delicious meal to serve to family and friends. When time allowed, Mom also enjoyed attending community social events and the occasional road trip to see what was happening in the community and beyond. In 2013, Mom and Dad moved to Gilbert Plains and lived there until her journey ended. Funeral services will be held at 11:30 a.m. on Saturday, February 9, 2019 at the Peace Lutheran Church, Moosehorn, MB with Dawn Tober officiating. Viewing will be held one hour prior to the service. Interment to follow in the Peace Lutheran Cemetery. Pallbearers will be Scott Roehl, Patrick Wideman, Adam Sharpe, Matthew Sharpe, Larry Vince and David Roehl. Honorary pallbearer will be Christopher Roehl. In lieu of flowers, donations may be made to the Alzheimer Society of Manitoba, 10 - 120 Donald St., Winnipeg, MB R3C 4G2 or to the Peace Lutheran Church, Box 68, Moosehorn, MB R0C 2E0. Special thanks to the staff at the Gilbert Plains Health Centre for their excellent and compassionate care. Thanks to John of Arnason Funeral Home. Arrangements by: ARNASON FUNERAL HOME Ashern - Lundar 1-204-768-2072 1-866-323-3593