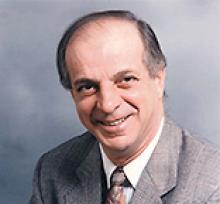 ANTHONY (TONY) AIELLO 1937 - 2019 Sadly, after a long battle, on January 17, 2019, with family and a few friends by his side, Tony passed away at Seven Oaks Hospital at the age of 81. Tony was born in Winnipeg where he lived his entire life. Predeceased by his parents, Catarina and Luigi, with whom he will find his final resting place. Left to cherish his memory is his son Dean (Lynne); and grandchildren, Mitchell, Katelyn and Christopher (Makaeli); great-grandchildren, Natalie and Liam; sisters, Connie, Rachel and Diane and brother Ralph (Maria); and several nieces and nephews as well as special friends, Darlene and Florence, who gave him strength until the end. Tony worked as an Electrician in the 1950s and 1960s while spending his spare time singing in a band with his brother Ralph and close friends, Buddy and Smokey. After a few years selling cars, it lead him to a long career as a Manufacturer's Representative in the electrical Industry. In 1980 Tony started his own business Mid-Can Technical Agency which he owned and managed until his retirement. His sincerity and determination made him a success. Many of his accomplishments can be seen lighting up the Manitoba Legislative Buildings, Riverwalk, Forks and around downtown Winnipeg. He had many friends from the Electrical Industry and he was always willing to share a few stories. Tony always had a few projects on the go either at home or at his cottage in Grand Beach. When he finally slowed down in his later years, he loved going to the Casino, talking about Fords, watching the Bombers and Jets and spending time with his family and friends. He was famous for flipping banana pancakes at the lake and cooking amazing pasta dinners. We would like to thank the many family, friends, neighbours, home care and ward V2 at Seven Oaks General Hospital that were there for Tony and his family during our time of need. As per his wishes, cremation has taken place and no service will be held. Interment will take place in the spring. "Dad you touched many lives, made memories and taught us lessons. You will always be in our hearts. We are praying you have been set free and found peace in God's hands. We know you are there to show us the way." www.voyagefuneralhomes.com