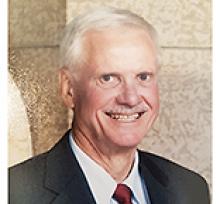 REV. DR. HAROLD JAMES KING It is with profound grief and sadness that we announce the passing of the Rev. Dr. Harold James King in the early morning of January 31, 2019, at the age of 83. He will be lovingly remembered and deeply missed by his wife of 61 years, Doreen (nee Delmage); five children, Bruce (Louise), Susan, Allan (Lori), Brenda (Brad), Doug (Becky); eight grandchildren, Lucas, Myles, Kyle, Noah, Jacob, Tia, Emma, and Lauren; his brother Marvin (Eileen); sister Doris (Jim); sister-in-law Shirley; brother-in-law Barry (Carol); as well as numerous nieces, nephews and extended family. He was predeceased by his parents, Benjamin Reuben King and Marjorie Myrtle King (née Lundy); as well as siblings, Jennie, Myrtle, Annie, Ron, and Elsie. Harold was born August 22, 1935 on the family farm in Warren, MB, where he completed grade 12 while involved in various sports, as well as creating his first entrepreneurial venture raising a flock of turkeys. Harold found his spiritual home at Warren United Church which encouraged his pursuit of a calling in the ministry. He attended United College for Arts (BA), and Theology (BD) and was ordained in 1960 to serve for pastoral charges while in McCreary, MB. Harold's strong interest in further education led him to Minneapolis, Chicago, and Denver to pursue studies in spiritual care and counseling. Now qualified as a Chaplain he took advantage of new opportunities in Ontario. He became executive director of the Interfaith Pastoral Counselling Centre in Kitchener. In 1972 he was hired as a professor in Pastoral Theology at the University of Winnipeg, as well as the Director and Coordinator of Professional Training at the Interfaith Pastoral Institute. In 1983 he obtained his Doctorate of Ministry Degree from the San Francisco Theological Seminary. In 1986 he was appointed Dean, Faculty of Theology at the University of Winnipeg. Throughout his career and retirement, Harold enjoyed giving back to the community through the church and working with many committees. Some of Harold's passions include traveling and gardening. Harold and Doreen traveled extensively in Europe, New Zealand, Australia, North and South America, Vietnam and Cambodia. In recent years he spent summers gardening alongside the Assiniboine River providing fresh vegetables to neighbours, friends and family. He especially loved spending time with his children and grandchildren throughout the holidays, time at the lake, family vacations and fishing. Harold was a proud father and grandfather, constantly talking about the academic, athletic, and artistic talents of his grandchildren. The family would like to thank the staff and caregivers of Seven Oaks General Hospital for all their support and hard work. We would also like to thank our friends, family and kind neighbours who have visited and supported through this time. In lieu of flowers, please consider donations to The University of Winnipeg Foundation "Doreen and Harold King Bursary in Theology" and the Interlake Community Foundation in memory of "Ben and Marjorie King Memorial Bursary Fund" or a charity of your choice. Funeral service will be held February 7, 2019 at 2:00 p.m. at Charleswood United Church, 4820 Roblin Blvd., Winnipeg, MB R3R 0G6. NEIL BARDAL FUNERAL CENTRE 204-949-2200 neilbardalinc.com