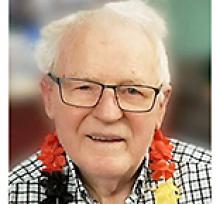 BENJAMIN NIKOLAI After a difficult and lengthy battle with Dementia, Ben left us on the morning of February 1, 2019. He was surrounded by loving family the last few days at the Riverview Health Centre. Ben is survived by his children, Bernie (Tina) Nikolai, Ruth (Robert) Ziegler; grandchildren, Michael (Lisa) Nikolai, Stephen Nikolai, Lisa (Martin) Klepka , Scott Ziegler; great-grandchildren, Lily, Blakely, and Tyson; brother-in-law Herbie (Louise) Butz; cousin Adolf (Monika) Krampetz; great-niece Andrea (John) Grozli; many nieces and nephews and extended family in Canada and Germany. He was predeceased by his wife of 61 years Jean, his parents and siblings. Ben was born April 21, 1929 in Wielkepole, Poland and came to Canada at age 19. He worked multiple jobs and finished his career as a Second Class Power Engineer for Manitoba Sugar, retiring in 1993. In his spare time, he enjoyed gardening, being at the cottage and spending time with his extended family. He made trips to Hawaii, Cuba and visiting family in Germany. Ben was a lifelong member at St. Peter's Lutheran Church. Donations in Ben's memory may be made to the Alzheimer Society of Manitoba or the St. Boniface Hospital Research Foundation. Flowers gratefully declined. A memorial service will take place at 1:00 p.m. on Thursday, February 7, 2019 at St. Peter's Lutheran Church, 65 Walnut Street, Winnipeg. Bardal Funeral Home 204-774-7474 Condolences: www.bardal.ca