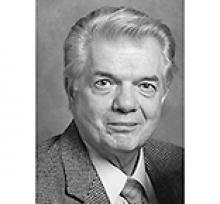 JAMES BELL CUTHBERT June 17, 1928 February 3, 2019 James Cuthbert passed away peacefully at the age of 90 at West Park Manor Personal Care Home. James is survived by his wife Lilian; son Richard; and daughter Jacqueline. He was predeceased by his father John; mother Edith; and sister Cathy; all of Winnipeg, MB. Dad grew up in the north end of Winnipeg, graduating from Cecil Rhodes High School. He worked in a mine for the summer but soon took up employment as a typesetter at Stovel-Advocate Press where he typeset some of the first Harlequin Romance novels. In his spare time, he played guitar in a band, rode his friend's horses and spent hours at the beach with his buddies. He met his wife Lilian at a social in Rennie, Manitoba, and married her on June 26, 1953. After the birth of his children, he eventually upgraded his education and went to Colorado to certify as a vocational education teacher. He was immediately hired by Red River Community College and helped design the Graphics Arts Program. He worked there as an instructor until his retirement. During those years he was a member of the Manitoba Rifle Association, took swing dancing lessons with Lilian, used his carpentry, electrical and plumbing skills to upgrade his Centennial Street home and took his family on many camping holidays. After retirement he and Lilian began to take winter holidays in the United States and took several European vacations. As Lilian's Alzheimer progressed he courageously and patiently cared for her until she became a resident at Westpark Manor. His children's lives have been deeply touched by his work ethic, his sense of duty to his family, his humour and his unending patience. We miss you already Pop! A memorial service will be held at Neil Bardal Funeral Centre, 3030 Notre Dame Avenue, Wednesday, February 6, 2019, at 7:00 p.m. A reception will follow. All are welcomed to attend and celebrate James' life. In lieu of flowers, donations made be made to West Park Manor Personal Care Home or Parkinson Canada. NEIL BARDAL FUNERAL CENTRE 204-949-2200 neilbardalinc.com