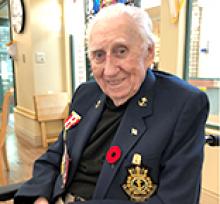 JOHN (JACK) (JAKE) CALVERT June 17, 1922 - January 14, 2019 After a slow decline in health, Jake passed away on Monday, January 14, 2019, at the Veteran Lodge at Broadmead, Victoria, BC, at the age of 96 years. Jake is survived by son Garry, daughter Debbie, and granddaughter Kimberly. Sister Doreen, eldest son Ralph, and wife of 68 years, Doris preceded Jake. Jake grew up in Winnipeg and left high school underaged to join the Royal Canadian Navy. He had such fond memories of this time, especially being on a minesweeper through the Panama Canal. After leaving the Navy, Jake joined his father to work at the C.N.R. where he became a Mason. Doris and Jake raised their three children in St. Vital, then retired in Victoria, near Doris's sister, Edith. Jake lived a "Charmed Life" according to Doris, as she witnessed his "Luck of the Irish" bringing home trophies and door prizes from his golf tournaments and curling matches. His luck continued at the Royal Canadian Legion where he'd win several times at the meat draw on a Saturday afternoon. Our last trip to the Legion at Christmas established a new record of 11 wins! Jake enjoyed Doris's large family and could be seen at reunions gliding Doris across the dance floor, sharing his love of music or telling a lively, colourful story that made people laugh. There will be a Celebration of Life on March 1, at the Veteran Memorial Lodge at Broadmead. Jake and Doris's cremated ashes will be interred at the Hemingson gravesite at Manson, Manitoba in June 2019. Rest In Peace Folks.