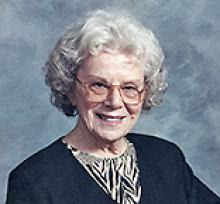 HELEN ELEANOR BARTOSH It is with sadness that we announce the passing of Helen Eleanor Bartosh on January 31, 2019 at the age of 98. Helen passed away peacefully at Seven Oaks General Hospital after a one-month illness. She was predeceased by her parents, Paul and Mary Bartoshek, her sister Stella (Buckowski) and brother-in-law Lou, sister Mildred (Szkolnicki) and brother-in-law Brian. Helen was born in Winnipeg on February 23, 1920. As a young child, she moved into a North End home with her family and lived there her entire life. In her youth, she was active in sports, especially skating, and also enjoyed time with family and friends, travelling with them often. Helen started her career as a secretary in lawyer offices in Winnipeg. After a few months' employment in Ottawa with the Government of Canada in 1941, she returned to Winnipeg to continue work for the Government for 33 years until she retired as a Personnel Supervisor in 1974. Throughout her life, she was recognized and admired for her fashionable style and appearance. She looked after her parents in their final years, and after their passing, Helen remained in the family home. She had a "green thumb" and took great pleasure in looking after her vegetable garden and flowers. Over the years, she "inherited" two cats from a family member and adopted a stray, providing a wonderful home for them. Helen enjoyed cooking, especially traditional Polish dishes, and sharing meals with her family. She hosted and contributed to all holiday dinners with family, as well as hosting many casual Saturday dinners in her role as "Aunty Helen". A pleasant person with a good sense of humour and wonderful laugh, she had a friendly personality that allowed her to make new friends, even in her final years. Her family would like to acknowledge the work and compassion of the staff on Level 3 at Seven Oaks General Hospital. The family greatly appreciates the work of WRHA, Comforts of Home Care, the kindness of neighbours (and the companionship of a neighbour's cats) that kept her happy and healthy and enabled her to remain in her home until a month before her passing. Cremation has taken place by Cropo Funeral Home. A memorial will take place in the Spring, with interment to follow at Holy Ghost Cemetery.