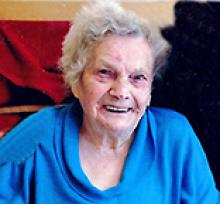 THERESA (ROSIE) MILLER April 22, 1918 - February 7, 2019 It is with heavy hearts, but a sense of relief, that we announce Mom's peaceful passing on Thursday, February 7, 2019 at the Kildonan Personal Care Home in Winnipeg, MB. Left to mourn her passing are daughters, Eileen Giesbrecht of Winnipeg and Loretta (Tom) Nattrass of Strome, AB; grandchildren, Larry (Agnes) Giesbrecht, Darrell (Gil) Giesbrecht, Gail (Jim) Woloski, Theresa (Kevin) Lunty and Kathy (Justin) Kerr; great-grandchildren, Ryan, Caitlin, Samantha (Rance), Jocelyn, Larissa (Scott), Colby, Paige, Tanner, Elyssa, Robert and Gemma; great-great-grandchildren, Aubrey and Reed; siblings, Lena (Frank) Koch, Anne (Bert) Gosselin, Les (Vi) Reiser, Frank (Sharon) Reiser and Margaret (Bill) Melnick; sister-in-law Eva Reiser, along with numerous nieces and nephews. Rosie was predeceased by her husband Earl 1952, son Earl 1998, son-in-law Peter 2016, parents, Stephen 1971 and Mary 1945, siblings, Stefan 1944, Liz 1989, Matt 1992, Josef 1993 and John 1998. She was born in Ganna, Hungary and came to Canada with her family in 1926 when she was eight years old. The family settled in the Ashern area and it was there where she met and married Earl Miller. Mom lived her life in Ashern until 2009 when she needed long term care and had to leave. Mom was first and foremost a farmer, always involved with the livestock, haying, raising chickens, growing her huge garden and picking berries. Mom's door was always open for a visit and no one ever left hungry. Mom, your 100 years have left us with many memories that we will never forget. A memorial service will be held at 1:00 p.m. on Thursday, February 14, 2019 at the Ashern Legion Hall with Shirley Russell officiating. A luncheon will follow in the hall. A private family interment will take place prior to the service in the Lakeside Cemetery. Rosie's family would like to thank the staff at the Kildonan Personal Care Home for their many years of care. In lieu of flowers, donations may be made in Rosie's memory to the Lakeshore Hospital Guild, c/o Julie Bergner, PO Box 721, Ashern, MB R0C 0E0 or to a charity of one's choice. Arrangements by: ARNASON FUNERAL HOME Ashern - Lundar 1-204-768-2072 1-866-323-3593