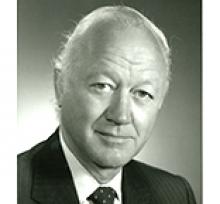 JAMES W. BURNS On February 11, 2019, James William Burns died in Winnipeg. Jim was born in Winnipeg 89 years ago and although he travelled around the world and lived in Boston, Chicago and Montreal for periods of his career, first and foremost, Jim Burns was "from Winnipeg". Only a Winnipegger can truly understand what that means. Jim Burns grew up in the Winnipeg suburb of Tuxedo, the son of Dr. Charles Burns and Gladys Burns. His childhood was more centered on adventure and mischief than studies but he managed to get through high school at Gordon Bell and graduate with a Bachelor of Commerce degree from the University of Manitoba. Jim then entered the MBA program at the Harvard School of Business and immediately on graduation in 1953, started his career with the Great West Life Assurance Company, becoming president in 1972 at the age of 41. While Great West Life remained the foundation of everything he did for the next 65 years, Jim Burns became a leading figure in the business community across Canada. He was Deputy Chairman of Power Corporation of Canada the parent company of Great West Life. He served on many boards, notably IBM Canada, Investors Group, Power Corporation, Power Financial, Consolidated Bathurst and Montreal Trust. He has been Chair of the Conference Board of Canada, Chair of the Prime Minister's Advisory Committee on Executive Compensation in Government and a founding director of the Council for Business and the Arts in Canada. He was particularly proud be be honoured with an Order of Canada, an Order of Manitoba and the creation of the James W. Burns Executive Education Centre of the University of Manitoba. He was able to express his pride in his alma mater by creating scholarships in the names of his father, his mother and his dear friend, Duff Roblin. He also took great pleasure in serving as Honorary Colonel of The Queen's Own Cameron Highlanders of Canada, based in Winnipeg. For the last few decades of his life, Jim Burns turned his skills and attention to supporting his community and charitable giving something that was always important to him even through his active career years. While he was always willing to help causes and people across Canada, his true passion was giving back to Winnipeg and Manitoba. He was instrumental in founding the Manitoba Museum of Man and Nature, was a driving force of Centre Venture for the creation of the The Forks Skateboard Park and gave generously of his time to the CancerCare Manitoba Foundation for over 15 years. In 1974, he was a prime mover in the citizen funded 'Save the Jets' campaign and in 1979, he joined fellow Winnipeggers to pave the way for the Jets to be welcomed into the NHL. Jim Burns shared his full life with his wife Barbara, until her death in 2003. He is survived by his three children and their spouses, James (Teresa), Martha (Paul), and Alan (Monica); his six grandchildren, Heather, James Robert, Margaret and Donald Burns and Hannah and Jack Gross; his three great-grandchildren, Audrey and Darcy Burns and Otis Dempsey; and his fourth great-grandchild, due in three weeks, Baby Hornby. Jim passed onto his children and grandchildren his appreciation for his city and for Lake-of-the-Woods, wanting them to know too the summers he had loved there as a boy. The Burns family extend deep gratitude to Agnes Paculan and Sonia Dena-En for their care and friendship to Jim during his last years. At Jim's request, there will be no service. In lieu of flowers, Jim would have encouraged his friends and family to donate to CancerCare Manitoba Foundation. An online journal for messages of support can be found on the website of Thomson Funeral Home https://www.dignitymemorial.com