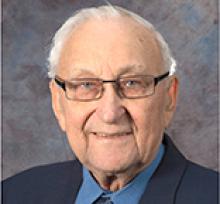 MIKE RYCHLICKI February 15, 1928 - February 11, 2019 Peacefully, with family at his side, Mike, age 90, passed away on February 11, 2019 at Grace Hospital. Mike will be forever missed and lovingly remembered by his beloved wife, Sandra (nee Klowak), daughter Cathie (Ken, Kyle, Taylor), son Brian (Irene, Kevin, Jeffrey), brother Nick (dec.), brother Charlie (dec.), sister Mary Chikowski (dec.), brother John (dec.) (Jean (dec.) and niece Jeanette), sister Pearl Lacko (Nick dec.), nephews, Larry (Loral) Lacko and Wayne (Ramona) Lacko. Mike was born in Silver, MB to Peter and Teenie Rychlicki and was raised on the family homestead. At an early age he ventured away from home and worked in the mining and construction trades. His love of construction carried him through his entire life helping anyone. On July 12, 1958, he married Sandra Klowak. Together they raised a family, made a home and shared 60 good years of marriage. Mike battled many illnesses along his way, including heart disease, but he always managed to stay positive and keep moving ahead with life. This included him packing up the family, along with brother-in-law William Klowak and mother-in-law Mary Klowak, and moving to Binscarth where they owned and operated the 580 Hotel in western Manitoba from 1966 to 1973. Mike loved to travel with his family in the summers and soon after retiring from the City of Winnipeg he made numerous trips outside of Canada with Sandra. The most memorable being church trips to Ukraine and Italy. Mike and Sandra spent many winters in Palm Springs and also loved short trips across the border to Grand Forks. Mike was especially proud of his grandsons, Kevin and Jeff. He had a very loving and active relationship with them. Whether it was taking them out for lunch or watching their hockey games - he was always there for the boys. He was also quite active with the Holy Eucharist Ukrainian Catholic Parish where he served on many committees, his favourite being the perogy making group. Funeral service will be held at Holy Eucharist Ukrainian Catholic Parish - 505 Watt Street, Winnipeg, MB at 11:00 a.m. on Saturday, February 16, 2019. In lieu of flowers, donations can be made in Mike's memory to the Heart and Stroke Foundation of Manitoba. Glen Eden Funeral Home 204-338-7111