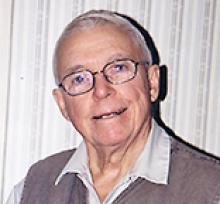 ROGER JAMES HANSELL, Q.C. June 25, 1929 - February 13, 2019 Roger was the second child of Herbert and Alice Hansell. He grew up in Winnipeg and attended Champlain, Queenston, Robert H. Smith and Kelvin high school, followed by the University of Manitoba and the Manitoba Law School. Roger excelled in his studies, and won many scholarships and academic awards. Roger pursued a military career while completing his university education. He was on active service in the Canadian Officers Training Corps for three summers during his undergraduate years. By the time he graduated with a B.A. degree at age 20, he had been promoted to the rank of Captain. He spent a great deal of time with his Reserve Army unit while completing law school. He was an instructor at the Royal Canadian School of Artillery. By 1957 he had become Commanding Officer of his Reserve Army unit, but retired in order to focus on the practice of law. Roger graduated from the Manitoba Law School in 1954. He was Valedictorian at his class graduation. John A. MacAulay, who was President of the Canadian Bar Association at the time, was in attendance, and invited Roger to join the law firm then known as Aikins, MacAulay, Moffatt, Dickson, Hinch and McGavin. In the late 1950s Roger met Nora Thorvaldson. They married in 1960 and had four children - Thor, Stef, Liz and Jane. The family grew up in River Heights, first on Elm Street before moving to Oxford Street in 1970, where Roger continued to live until last September. Roger always found time for his children, attending their school and sporting events, and helping them as they became adults and started their own families. He told his children that they were his greatest asset and that he was the wealthiest man in the world. Sunday dinners at Oxford were magnificent and included countless guests over the years. Stef continued the tradition in Roger's later years, and he always looked forward to dinner at Stef's, right up until a few weeks ago. In 1969, Aikins, MacAulay & Company amalgamated with Thorvaldson & Company to form Aikins, MacAulay & Thorvaldson, Manitoba's largest law firm. The fact the amalgamation united Roger in the same firm with his father-in-law, Senator Solly Thorvaldson, was of great significance to the family. Roger practiced law at Aikins, MacAulay & Thorvaldson for 54 years until he retired from the firm in 2008. He practiced as a sole practitioner for a few years after that. An anachronism in today's world of legal specialization, Roger practiced in almost every area of the law. He acted for numerous large clients for many years. He appeared in the Supreme Court of Canada on several occasions, including some landmark cases. He had extensive expertise in labour and employment law, and was involved in countless arbitrations, labour negotiations and employment matters. As Roger's family grew up they spent every summer at the cottage at Granite Lake. Roger would take time away from his busy practice to be at the lake camp with his family every weekend. In more recent years, he loved watching his grandchildren enjoy the lake. Roger continued going to Granite Lake, swimming his laps and enjoying the company of close friends until about two years ago. Granite Lake was a very special place for him and his family for more than 55 years. Roger was a longtime member of the Winnipeg Winter Club, where he played badminton for many years. He was also a longtime member of the Manitoba Club and St. Charles Country Club, although he would say he was far too busy practicing law to ever become very good at golf. Roger was known for his enthusiasm, drive and sense of humour. Having studied Latin for many years, and other languages as well, Roger was a bit of a linguist and a fierce grammarian. He was a true wordsmith, and his many speeches, toasts, limericks, and odes will be fondly remembered by his friends and family. Roger was predeceased by his parents, his sister Joy in 1983, his wife Nora in 1997 and his daughter Liz in 2016. He leaves behind son Thor (Nada - Jocelyn, Gillian, Thomas), daughter Stefanie Cupeiro (Paul - Tate, Alex, Reed), granddaughter Meg Hansell (Liz's daughter), and daughter Jane Hansell (Charles Dawes). A service to celebrate Roger's life will be held on Thursday, February 21, 2019 at 2:00 p.m., at St. George's Anglican Church, 168 Wilton Street, (at Grosvenor Avenue), in Winnipeg. NEIL BARDAL FUNERAL CENTRE 204-949-2200 neilbardalinc.com