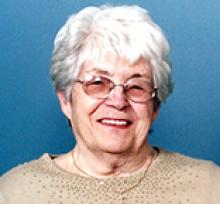 SYLVIA MAY ANDERSON RETTALER (nee DOBSON) Peacefully on Sunday, February 17, 2019, at the Concordia Hospital, Sylvia passed away at the age of 96 years. Sylvia will be lovingly remembered by her children, Sylvia Anderson, Pat Doern, Richard and Brenda Anderson; her grandchildren, Darrin Kirby (Carolyn), Gordon Pritchard (Reneé), Patricia Sweryd (Kevin), Rachel Doern (Rob), Kelly Mitchell, Millie Anderson, Richard Anderson and Ryan Anderson; her great-grandchildren, Carling, Adam, Erin, Reilly, Sydney, Delaney, Alexandra, Mia and Hazel. Sylvia will also be remembered by her sisters living in England, Jackie Holden and Dot Keenan, as well as numerous nieces and nephews and many members of the Rettaler family. She will be greatly missed by all who knew her. Sylvia was predeceased by Richard Anderson, her first husband of 41 years, who passed away in 1981. Sylvia was also predeceased by Henry Rettaler, her second husband of 25 years. Sylvia was born December 9, 1922 in Battersea, London, England. She met and married Richard during the war in 1940 and she came to Canada as a war bride in 1946. They raised their family in Winnipeg, and retired to Matlock, Manitoba. Over the last eight years Sylvia lived at Donwood Manor Elderly Persons Housing where she received fantastic care, the family wishes to thank the staff and residents who made Sylvia's time there so special. The family would like to thank the caring staff of the Concordia Hospital (3 West) for the excellent care that they gave to Sylvia over the last week. A funeral service will be held 1:00 p.m., Friday, February 22, 2019 at Bardal Funeral Home, 843 Sherbrook Street, with a reception to follow. A private family committal will take place at a later date. Bardal Funeral Home 843 Sherbrook Street, 204-774-7474 Parking Behind Funeral Home Condolences: www.bardal.ca