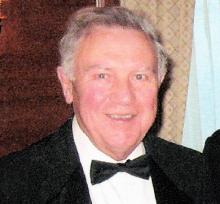 JOHN H. (JACK) JUNSON December 8, 1923 - February 14, 2019 The clouds parted and the sun was shining as John peacefully departed this world, on February 14, 2019, with his family by his side. It seemed appropriate that it was Valentine's Day, as he was loved by all. John will be lovingly remembered by his wife of 70 years, Noreen; son John (Pauline); daughter Janeen (Regan); grandsons, Tyler (Lindsay) and Scott (Alicia), and great-granddaughters, Madison and Ruby. John was born December 8, 1923 in Moose Jaw, Saskatchewan. He grew up on the family farm in the Oxbow, Saskatchewan area. John had a life changing experience as a youngster in the 1930s, when a barnstorming pilot came to town and offered rides for 50 cents. Along with a couple of friends, he had his first airplane ride in an open cockpit biplane with no seat belts. When asked recently if he was scared, he said, "No, I enjoyed it immensely!" This experience gave him his lifelong love of weather, airplanes and model airplanes. John began his career as a meteorologist in the Yukon in the 1940s, where one of his early tasks was documenting the Aurora Borealis. He completed thirty-five years as a forecaster, briefer and climatologist with Environment Canada. During the 1960s and 1970s, he wrote a weekly weather column for the Winnipeg Free Press. After retiring, he started his own company, WeatherTec Services, which provided weather pages for daily and weekly newspapers. All in all, his two consecutive weather careers made him one of the longest serving meteorologists in Canadian history. John met the love of his life, Noreen Robinson, in high school after his family moved to a farm near Melita, Manitoba. They were married on August 11, 1949. They enthusiastically participated in all aspects of Winnipeg's cultural life, including RWB, MTC, Rainbow Stage, and nearly every Folklorama pavilion every year. Jack and Noreen had many memorable international vacations with their great friends, including the "Seagull Club", to San Diego, Mexico, Hawaii, Cuba, Australia, Scotland, as well as cruises to Alaska, the Caribbean and a riverboat cruise on the Rhine. They loved going on camping trips across the country, and especially enjoyed spending time with their grandsons at Rocky Ridge. John was an active member of Sturgeon Creek United Church for over 50 years. He was on the board, helped establish the Foundation and was on several committees. While John was known as a scout leader, volunteer, ballroom dancer, dabbler in commodities, builder of model airplanes and Jets/Bombers fan, he was best known for being an amazing husband, father and grandfather. He was a very caring person who always gave of himself unconditionally, and never hesitated to do the right thing, whether it was rushing down a dock to help a man who fell off a boat in Toronto harbour, or helping refugees get settled in Winnipeg. John's positive attitude and his tenacity to live helped him overcome many life-threatening situations including a heart attack, cancer, and a burst appendix when he was a boy. Because of his sense of humour and very friendly nature, John was well loved by all his caregivers. Our heartfelt thanks to the staff of Sturgeon Creek I Retirement Residence, and to the staff of Riverview Health Centre. Special thanks to his SC1 nurse, Kathleen, and to his homecare worker, Veronica. A memorial service will be held at 2:00 p.m. on Monday, March 4, at Prairie Spirit United Church (formerly Sturgeon Creek United Church), 207 Thompson Drive, Winnipeg, Manitoba. In lieu of flowers, donations in John's memory can be made to Riverview Health Centre or the Royal Aviation Museum of Western Canada. NEIL BARDAL FUNERAL CENTRE 204-949-2200 neilbardalinc.com