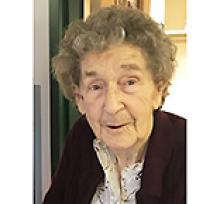 MARY REED SHALE (nee TIZARD) It is with heavy hearts we announce the passing of our dear mother Mary, aged 96 years, on Thursday, February 21, 2019, with family by her side. She leaves to cherish her memory, David (Elsie), Wendy (Al Murray), Barry (Karen) and Neil (Jackie); six grandchildren, and seven great-grandchildren. Mary was predeceased by her beloved husband of 53 years, Bob (Christopher Robert) Shale, and her parents, Edith (Reed) and Joseph Tizard. Mary was born in Seaham, County Durham, England on July 12, 1922. During the Second World War Mary met Bob, a dashing service man from Canada; they were wed September 19, 1942. After the war, Mary and their first child David, traveled by ship to Halifax, then by train to Winnipeg to reunite with Bob. They had three more children and lived in a small peace time house in East Elmwood for 65 years. Mum loved children and took pride being a Brownie leader for many years. After her kids were grown mum took a job at the Winnipeg Arena ticket office. This put her keen math skills to use and she would balance to the penny each night. She treasured that job and all the fantastic people she met there. In her later years she kept active by volunteering at CancerCare for many years with her good friend Shirley. Funeral service will be held 10:00 a.m. Friday, March 1, 2019 at Thomson Funeral Home, 669 Broadway, Winnipeg, MB. Lunch to follow. Cremation has taken place. Mary and Bob will be interred together at the Elmwood Cemetery after the luncheon. In lieu of flowers, donations may be made in Mary's memory to CancerCare Manitoba. The family would like to sincerely thank the second floor staff of Lions Personal Care Centre for their compassionate care and kindness. THOMSON FUNERAL HOME 204-783-7211 Condolences may be sent to www.thomsonfuneralchapel.com