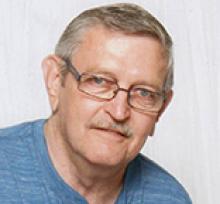 SAMUEL (GEORGE) DUNWOODY It is with sinking hearts we announce that George's ship has sailed to his final destination on February 20, 2019 from St. Boniface Hospital. George was raised in Pointe du Bois and went on to join the Royal Canadian Navy, where he served until his retirement. He is survived by his wife Arlene, sons, Bobby (Rhonda) and Peter (Candace), daughter Kim (Chris) and grandchildren, Cody, Kolton, Braiden (Hannah), Zak, Addie and Trey. He also leaves behind his sisters, Judy, Sheila, Ruth, Cathy and Peggy. George was predeceased by his parents, Sam and Isabelle and sister Pat Cure. Friends may join us for a final Salute to George on Saturday, March 9, 2019 at 11:00 a.m. at the Royal Canadian Legion Branch 164, 45 McArthur Avenue in Lac du Bonnet. Donations in his memory may be made to St. Boniface Hospital Foundation in care of Heart Failure Clinic Fund, Room C1026-409 Tache Avenue, Winnipeg, MB R2H 2A6. Condolences may be left at seasonsfunerals.ca