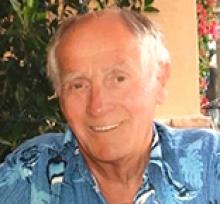 WILFRED JOHN (JACK) FORSYTH Jack passed away peacefully, Wednesday, February 20, 2019, at the age of 79 years, at home in Snow Lake, Manitoba, with his wife Mona by his side. Jack is survived by his wife Mona, brother Bob (Linda), sons, Bill (Shelly) and Bob (Dori), daughters, Brenda (Kevin) and Barb (Dane), grandchildren, Kalee (Tony), Candice, Leif, Colleen (Randy), Calvin (Cassidy), Aiden, Elin, Lola, and great-grandchildren, Chloe, Hudson, Bentley, Cooper and Cruz. Jack was predeceased by his parents, Wilf and Inez, and granddaughter Alana. Jack was born on February 24, 1939, the eldest of two sons born to Wilf and Inez Forsyth, in Flin Flon, MB. Mona and Jack's love story began in high school in Flin Flon where they met and fell in love. They were married September 9, 1961 and moved into their brand-new home at 602 Lakeshore Drive in Snow Lake, MB. The raising of the four Bs started with Bill in 1964, followed by Bob in 1965, Brenda in 1967 and Barb in 1971. Jack and Mona lived and loved in that house until 2016 when they moved down the Lakeshore to their beautiful new condo. Jack kept busy making Snow Lake a better place to live, work and raise a family through his work with Scouts Canada, Kinsmen, K-40, Lions, Grass River Corridor, Northern Neighbours, and as Magistrate, Deputy Sheriff, Counsellor for the LGD and Town, and Mayor. He received the Queen's Jubilee Medal in 2002, the Manitoba Tourism Volunteer award in 2003, and in 2008, Forsyth Agency and Snow Lake News received the Business Award from the Greenstone Community Futures Development Corporation. He was passionate about hunting, fishing and golfing with family and friends. Jack always had vacations planned for the family, towing a camper across Western Canada and the USA. Every summer seemed to begin and end in and around Kennville, MB at his grandpa and grandma's house, or at the farm of his uncles, Durwood and Rae. Jack hired on with Hudson Bay Mining and Smelting (HBMS) as an apprentice Plumber / Boilermaker in 1956 and was employed in that trade for the next 38 years. Then, in the early 1970s, he began to work out of his basement office as an insurance agent. In 1977, Jack and Mona bought the building and opened Forsyth Agency where they remained for over 40 years. When Jack retired from HBMS, he and Mona chose Palm Springs, California as their winter paradise in the sun. There Jack enjoyed golfing in local tournaments, marshalling on the course, the occasional cold beer by the pool, relaxing with a good book, and men's night with his Palm Spring Crew. Grandpa Jack / Poppa Jack, as he was affectionally known, enjoyed life to the fullest whether it was relaxing at #1 Anderson Bay Cabin, golfing a round with the boys, or jigging a walleye or two, just a friendly cup of coffee and a chat. Jack will be fondly remembered and always cherished by friends and family. Rest in peace. A Celebration of Life for Jack was held Saturday, February 23, 2019 at 1:00 p.m. from the Lawrie Marsh Community Hall in Snow Lake, MB. Interment followed at Brookside Cemetery in Snow Lake, MB. If friends so desire, memorial tributes in Jack's name may be made to the Snow Lake Mining Museum, P.O. Box 40, Snow Lake, Manitoba R0B 1M0. Dadson Funeral Home & Crematorium of Flin Flon, Manitoba was entrusted with the arrangements. www.dadsonfuneralhome.com 1-877-460-2444