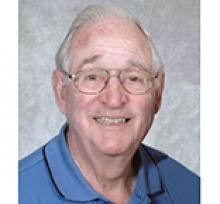 GEORGE ALEXANDER RYDER With great sadness we announce the peaceful passing of George Ryder. George passed away in his hometown of Portage la Prairie, MB on February 25, 2019, shortly after celebrating his 90th birthday. George leaves behind his beloved wife Wanda Ryder (nee MacDonald), with whom he recently celebrated his 70th Wedding Anniversary. Left to cherish his memory are his children: Deborah (Rob Kenig) and her children, Joel and Jessa; and Krista (Don) Zeghers, and their children, Aaron and Leah. He will be lovingly remembered by his extended family: sister-in-law Florence and children, Bryan (Barb), Marilyn (Norm) Gosset and Wayne; sister-in-law Connie Krawec and sons, Patrick (Tara) and Mark (Deborah); brother-in-law Waind (Vyra) MacDonald and their children, Darren (Trish) and Michelle (Ron) Best; and countless other family, friends and loved ones. George was predeceased by parents, Richard and Malvina (Stitson); son Danny; brother Dave; sister Ethel; and brother-in-law Marvin Krawec. George was born on February 14, 1929 and lived his entire life in Portage, where he was known as a consummate businessman and active community member. He started working at Lyon's Garage as a young man during wartime and quickly proved himself as a good salesman and tow truck driver, even if he didn't yet have a license! His reputation for honest dealings garnered George many repeat customers at Portage Chrysler, where he would work for 49 years until he retired. George said, "Part of the staff success is the humour we have kept up through the years. Both Alvin and I have a quick wit that kept us going." Growing up in the early years, George would spend his time milking cows, hypnotizing chickens, and learning how to skate on Crescent Lake. George eventually fell in love with a schoolmate who lived seven miles north of town - Wanda MacDonald! As George said, "During our courtship, I learned just how cold our winters really are," as road conditions would force him to leave his car and walk the last few miles over snowdrifts to visit Wanda. Wanda and George married soon after and started their own family. George loved his children and grandchildren dearly, as well as the rest of his and Wanda's extended family. George and Wanda's children, Debbie and Danny gave them many opportunities to travel to visit them, from the Yukon to Nelson, BC and California to Hawaii! George enjoyed visiting his youngest daughter Krista on their family farm near Holland, MB, occasionally getting behind the wheel of the grain truck. Always with a smile and a story to tell, George believed in community building and served as the Exalted Ruler of the Portage Elks Lodge and President of the Portage Rotary Club. George loved socializing and enjoyed golf, curling, gardening, and set building for the Prairie Players theatre group. His tomatoes and roses were the envy of many neighbours. In retirement, George and Wanda enjoyed travelling the world through Rotary and wintering in Texas, through which they made many dear friends. A service to celebrate George's life will be held in Portage la Prairie on Saturday, March 9 at 1:00 p.m. at Trinity United Church, 15 Tupper St. S., Portage la Prairie. In honour of George and his love for the community, donations may be made to the Community Foundation of Portage and District, 206 Saskatchewan Ave. E., Portage la Prairie, MB R1N 0K9. A tree will be planted in memory and cared for by McKenzies Portage Funeral Chapel. 204-857-4021 www.mckenziesportagefuneralchapel.com