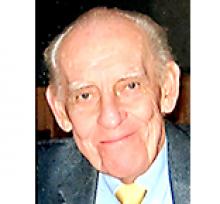 ROBERT GERALD HANDFORD, B.A., M.D., F.R.C.P. (C.) Bob passed away February 21, 2019 in Winnipeg at the age of 89. He was born in Winnipeg on July 1, 1929, and was a proud descendant of the Snowflake, Manitoba Handfords. He is survived by his wife Donna (Coffey); children, James, Lorraine, and Ian (Elizabeth); grandchildren, Leane (John), Kerri (Jason) and Henry; great-grandchildren, Kaylee, Kaleb, and Aries; stepchildren, Lynn (Paul), Daniel (Patricia), Catherine (Peter), David (April), and Janice (David); his stepgrandchildren, Stacey, Ashley, Tyler, Matthew, Jennifer, Christopher, Rebecca, Conor, Ezekiel and Zachary; as well as numerous nieces and nephews. He was predeceased by his parents, Dr. Cuthbert and Verna Handford; infant brother James; sister Eileen Chapman; beloved son Bruce Handford; and lifelong dear friends, Drs. Hugh and Mary Kidd. Bob graduated from the University of Manitoba's Faculty of Medicine in 1955, and later specialized in Internal Medicine. He had a particular interest in cardiology, and a singular talent as the consummate diagnostician. He was simultaneously Medical Director of the Home Care Program at Health Sciences Centre, Medical Director of Monarch Life Assurance Company, worked in the Health Sciences Centre Internal Medicine Clinic, and was a full-time academic physician in the Department of Internal Medicine, University of Manitoba. He was past president of the Manitoba College of Physicians and Surgeons. He retired as one of the senior physicians at Health Sciences Centre, having practiced medicine there for 57 years. Balanced with his medical career was a lifelong consuming passion for sports and games. He played a strong game of chess, was a talented bridge player, a champion curler and golfer, and a hard-won Jets fan. Every summer he drove his young family down to Minneapolis to watch the Twins. For many years he was team doctor for the Winnipeg Blue Bombers. Intellectual and literate, Bob had a deep love of reading. There were always copies of The New Yorker and The Atlantic laying about, mixed in with The Lancet and The New England Journal of Medicine. He loved nothing more than to discuss the latest Great Canadian Novel. He was as proud of his liberal arts degree as he was of any medical accomplishment. He was also a charter member of the Over the Hill Club, where for decades he would meet up with Barry Kaufman, Bill Fyles, Eric Mann, Earl Hershfield, and Arnold Naimark for steak sandwiches and endless conversation at Rae & Jerry's. Bob and Donna's house was always full of warmth, meaningful discussion and a wonderful sense of joy. Bob's droll sense of humour, his companionship and genuineness will be forever remembered by all who knew and loved him. Please join the family for a time of fellowship and celebration at the Niakwa Country Club, 620 Niakwa Road, Winnipeg, on Saturday, April 20, from 2:00 p.m. to 4:00 p.m. In lieu of flowers, donations may be made to the Siloam Mission, 204-956-4344, siloam.ca. www.voyagefuneralhomes.com