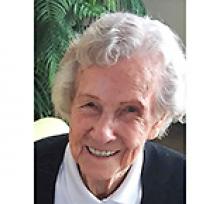 JACQUELINE SELBY Jacqueline Jean (Falloon) Selby was born on August 13, 1923 and is the beloved third daughter of Jack Falloon and Louise (Wilson). She passed away peacefully, surrounded by her family on February 27, 2019 in Russell, MB. Jacky was predeceased by husband Robert (Bob) in 1991 and daughter Margaret in 1976. Mom was raised in the Falloon family stone house on the homestead farm and attended school in Foxwarren, MB. She married her life-long partner following the Second World War and after several moves, settled in St. Lazare, MB, where they raised their seven children. Mom's lifelong interest and passions were family, people, travel, horses, the outdoors, reading, golf and bridge. Her appreciation of family and people has been passed on to each of her children. She leaves to mourn her children, Larry (Glenda), Ken (Helen), Wayne (Susan), Elaine (Frank), Don (Arta) and Laurie Lea (Jim); as well as her sisters, Leslie McPhee and Bette Claridge; sisters-in-law, Paulette Selby, Lea Selby, Jean Falloon, Geri Falloon and Jeannine Selby and brother-in-law Guy Selby; 20 grandchildren; 39 great-grandchildren and many nieces and nephews. A funeral service will be held on Saturday, March 2, 2019 at 2:00 p.m. from the St. Lazare Roman Catholic Church. Interment to follow at the St. Lazare Cemetery. If friends so desire, donations may be made to Expanding Community CancerCare c/o Russell Health Centre, Bag Service 2, Russell, Manitoba, R0J 1W0. Remembrances and condolences may be shared with the family at www.braendlebrucefs.ca Braendle-Bruce Funeral Service, Russell in care of arrangements (204) 773-2747.