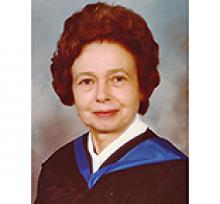 CATHERINE MARIA THEXTON (SLATER) 1921 - 2019 It is with great sorrow the family announces the passing of Catherine Maria Thexton (nee Slater), aged 98, formerly of Balmoral, MB, on February 27, 2019, at Rosewood Lodge, Stonewall, MB. She will be sadly missed by her four nieces, Carol Schaeffer, Heather (Joe) Corbett, Jean (Ed) Rootsaert and Joan (Dean) Holliston. Also mourning Catherine are her nephew Wayne (Carole) Thexton of Nanaimo, BC, and niece Erin (Mike) Cosentino. She leaves to remember her many great-nieces and nephews. Catherine was predeceased by her loving husband George (2004), her brother Charlie (2005), his wife Velma (2011), as well as George's siblings, Stewart (Evelyn) Thexton, Bruce (Fern) Thexton, Lillian (Bob) Edmonds, Fern (Del) Young, Mae (Cliff) Zaroski and Islay (Bill) Hobson. Catherine was born January 8, 1921 to loving and caring parents, John Henry and Alexa Slater (nee Simpson) at Balmoral, MB. She was raised beside Jackfish Creek and this is where her love of nature began. She received her education in Balmoral. Following that, she went to Winnipeg Normal School, received her teaching certificate and launched her teaching career. Her first position was Middleton School near Manitou on August 22, 1939. She later taught at Miniota, Lac Du Bonnet, Garson and Oak Bluff. She married George Wilson Thexton on February 16, 1943, during the Second World War. While George was on duty with the R.C.A.F. in England, Catherine taught school. When the war ended Catherine remained at home as a farm wife in Balmoral for 15 years. With George's full support she then went on to the University of Manitoba and received her B.Sc. (1966), B.Ed. (1973) and M.Ed. (1978). She was teaching in Winnipeg at Principal Sparling School and then St. John's High School where she taught biology and introduced a course in ecology. She was employed there until her retirement in 1978. She then had time to pursue her interest in recording "sounds of nature" on their farm near Balmoral. Over the next 10 years she recorded audio sounds of birds and nature which she then sold worldwide to nature enthusiasts. As an infant Catherine was on the Cradle Roll at the Balmoral United Church and continued to be a lifetime member. She was also a lifetime and proud supporter of the Liberal Party of Canada, just like her father and brother and was a member of the Laurier Club. Catherine was involved in publishing "100 Years of History - Rockwood Municipality" in 1982. She was also instrumental in writing "The Greenridge School Story" and fundraising to erect a cairn and bench at the sight north of Balmoral in 2011. In 2006 Catherine gave a land donation to the Nature Conservancy of Canada, in George's memory, which reflected their lifelong appreciation of nature. This 40 acre Old Growth Forest known as "Thexton Oaks" is located two miles east of Balmoral. In 1990 Catherine received an honorary life membership to the Nature Conservancy of Canada. She was so proud of her Scottish ancestry and shopped for years through the L.L.Bean catalogue, buying many a tartan shirt. During the last several years her vision failed and she became legally blind. Then she would have others help her call the catalogue. The past 25 years were spent at Lions Manor, Stonewall where she continued to work on her projects. Catherine was never bored. The family would like to thank John and Helen Hildebrand, John and Carol Morgan, Karen Miller, Dr. K. Graham, Michelle Loehmer and the homecare staff, as well as the staff at Rosewood Lodge for their support. A memorial service will take place at the MacKenzie Funeral Home, Stonewall, on Saturday, March 9 at 2:00 p.m. The pallbearers will be Catherine's great-nephews, Campbell Gibb, Bryan, Peter, Mark and Christopher Rootsaert and Craig Cosentino. Interment in Victoria Cemetery, Balmoral. If friends so desire, in lieu of flowers, donations may be forwarded to the University of Manitoba and directed to the "Catherine Thexton Endowment Fund" in care of Monica Carlberg, B.Sc., Donor Relations, University of Manitoba, 200 - 137 Innovation Dr., Winnipeg, MB R3T 6B6, phone: 204-474-7424, or to a charity of your choice. MacKenzie Funeral Home Stonewall 204-467-2525 info@mackenziefh.com