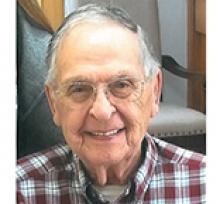 JOHN KENNETH CRAIG It is with deep sadness that we announce the passing of John Kenneth Craig on March 4, 2019 at the age of 88 years. Left to cherish his memory are his loving wife of 64 years, Joan, sons, Gordon (Susan), Bruce (Debbie) and James, daughters, Joanne, Judith, and daughter-in-law Christine as well as his grandchildren, Christopher (Natalie), Andrew (Sarah), Tyler, Matthew, Joshua and Lorianne and great-grandchildren, Kieran and Alyssa. Ken is also survived by his sisters, Frances Kapetz and Ruth Hansen, sisters-in-law, Kathy Baryla and Dorothy Anderson, brother-in-law Garry Donaldson as well as numerous nieces and nephews. He was predeceased by his parents, John and Elizabeth, daughter Patricia, sisters, Blanche and Olive, son-in-law Brent Boivin and brothers-in-law, Sidney Burnell, James Anderson, Peter Whitmore, Paul Baryla and Winston Layette and sister-in-law Beverly Donaldson. Ken was born in Pilot Mound, Manitoba on March 13, 1930 and moved to Winnipeg with his family in 1941. Ken graduated high school in 1947 and worked many jobs but found his lifetime employment with the CN Rail in 1951. He worked many shifts as a car checker at the CN with his father John (Jack) who worked as the yardmaster. In 1953 Ken met the love of his life Joan and they were married in 1954. They celebrated their 64th anniversary on October 16, 2018. After over 40 years of service, Ken retired from the Railway in 1991 and was able to dedicate his love to his grandchildren and great-grandchildren who were the light of his life. Ken also spent many days in his backyard tending to his flowers and was always there to help anyone who had questions or needed advice on what flowers would grow well in their yard. Ken was a dedicated member of the Windsor Park United Church where he co-founded the WPUC Garden Club with his good friend George Baker. The garden club taught many people, young and old, the joy of growing flowers which inspired them to start their own gardens. Dad also dedicated his retirement to the genealogy of his family which included many road trips to Pilot Mound and Baldur, where he tended to the resting places of his ancestors. Dad was able to trace his lineage all the way back to 1692. Dad passed on his love of family through his many stories, calendars and family tree books he gave to all of us. Dad passed peacefully and is now resting in God's embrace. Funeral service will be held on Friday, March 8 at 11:00 a.m. at Thomson Funeral Home, 669 Broadway with viewing one hour before the service and reception to follow. Interment thereafter at Brookside Cemetery, 3001 Notre Dame Avenue. Flowers are respectfully declined; donations can be made to CancerCare Manitoba or the Winnipeg Humane Society. THOMSON FUNERAL HOME 783-7211 Condolences may be sent to www.thomsonfuneralchapel.com