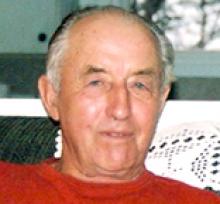 HENRY MARTENS Henry Martens, aged 89, died March 3, 2019 at the Rock Lake Hospital, Crystal City, Manitoba. I was born February 7, 1930, in the paper mill town of Kapuskasing in Northern Ontario. I was predeceased by my mother, Anna Martens (nee Enns) two weeks after my birth. My mother's aunt, Anna Toews, took care of me for the first four years of my life. My father remarried and I had four siblings, one brother Gert Martens (Kathy) and three sisters, Helga (Ed) Enns, Ingrid (Abe) Penner and Hildegard Martens. I met my life partner, Hilda Wiens when she came to visit relatives in the Cartwright area. We were married June 6, 1953 and spent 57 great years together. We were blessed with the birth of three sons: Erwin Wayne (Colleen), grandchildren, Liam and Alyssa; Robert Garry (Kim), grandchildren, Jodie (Ryan) and Ryan (Lindsey); and Larry Allen (Jan), grandchildren, Jaret, Justin (Karly) and Tyson; as well as great-grandchildren, Reed, Thea, Blakely, Kyla, Grayson and Jade. I was predeceased by my wife Hilda, my parents, Gerhard and Louise Martens, in-laws, Peter and Margaret Wiens, my brother Gert Martens, and sisters-in-law, Martha Derksen and Helen Enns. Before my marriage, I spent a number of years working in different pulp and lumber camps in both Ontario and Manitoba. After our marriage, my wife and I took up farming as our life's occupation with some good and difficult times. In accordance with Henry's wishes cremation has taken place, and a memorial reception will be held on June 6, 2019 at the Cartwright Centennial Hall. Donations in memory of Henry may be made to the Mac Robinson Community Centre, Box 9, Cartwright, MB R0K 0L0. Messages of condolences may be made online at www.wheatlandfs.com Wheatland Funeral Service 204-825-2848 - www.wheatlandfs.com