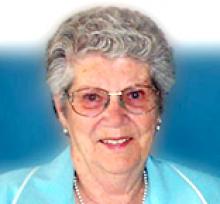 MARGARET HELEN SCOTT (nee BOWMAN) September 30, 1923 - March 4, 2019 It is with deep sadness that we announce our mom passed away peacefully on Monday, March 4, at Meadowood Manor, with her family at her side. Left to mourn her passing are her seven children, Joe Scott (Diane), Anne Marie Teillet (Paul), Jennifer Proctor (Terry), Jack Scott (Jackie), Tom Scott (Annabel), Gisele Scott-Woo (Glen) and Florence Scott-Wilson (Jeff); as well as 18 grandchildren; seven great-grandchildren; her sister-in-law Audry Scott, and many nieces and nephews. Mom was predeceased by her husband, Walter; grandson Jason; her brother Alec Bowman; her sister Florence Fumerton; sister-in-law Pat Bowman; brother-in-law Keith Fumerton; brother-in-law Harvey Scott; her nephew Bill Fumerton, and her special friend Don Hogaboam. Our mom lost Dad at an early age (42); and with great strength and wisdom was able to carry on and raise seven children on her own. She began work with the Federal Government at The National Parole Board as office manager. She described that job and the people who she worked with as being a wonderful time of her life. Mom retired at the age of 62. She was able to travel to Europe several times, Hawaii, the US, and to visit her out of town children and grandchildren in Boston, Toronto, Calgary and Abbotsford. She earned the nickname, "Suitcase Grandma". Mom had many interests which included golf, bridge, reading, crocheting, crosswords and puzzles. She always made time to volunteer at things that were meaningful to her. Mom was a founding member of Christ The King Catholic Church. Her faith was a central part of her life in the way she lived her life. She never preached or judged but lead by example. She went about her good deeds quietly and diligently, affecting those around her. We are so grateful that during Mom's last one and a half years of her life, when she was so frail, God wrapped His arms around her and gave her a home with compassionate and caring people, close to her children. This was Meadowood Manor. In lieu of flowers, a donation to a charity of your choice would be appreciated. A Mass of Christian Burial will be held 10:00 a.m., Friday, March 15, 2019, with a reception following, at Christ The King Church, 847 St. Mary's Road, Winnipeg. Bardal Funeral Home 204-774-7474 Condolences: www.bardal.ca