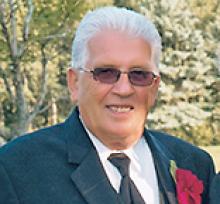 DONALD ALVIN HUGHES May 17, 1939 - March 6, 2019 With his loving wife of 49 years by his side, Donald (Donnie) Alvin Hughes took his last breath after recent health issues. Don is survived by his wife Lorraine (Brown), children: Leanne Ainley, grandchildren, Jennifer, Matt and Mitchell; son Kevin (Cindy), grandchildren, Luke and Julia; son Ryan (Traci), grandchildren, Hunter and Sydney; daughter Joette Trudeau (Marc), grandchildren, Justin, Mackenzie, Mia and Jack; his brother David (Myrna); nephew Cam; niece Cathy St. Mars (Jamie); his sister-in-law Verna Nisbett (Bill); brother-in-law Ken Brown (Sharon); along with numerous nieces, nephews and relatives throughout Manitoba, Saskatchewan, Alberta and British Columbia. Don was predeceased by his mom Jean (1998), his dad Cecil (2011), his father-in-law Marvin (1987), and his mother-in-law Edith (2012). Don was born in Cabri, Saskatchewan and moved to Swift Current as a young boy. He eventually moved to Winnipeg and found his passion for car sales and his love for talking to people and making new friends in the early 1960s. Don worked in car sales for over 45 years before officially retiring in 2011. Don met the love of his life, and caregiver until the last moment, Lorraine, when they worked together at Dominion Motors in November of 1968. They were married on August 1, 1969 and moved many times within in Winnipeg and Saskatchewan, until finally settling in Oakbank, MB in 1980 and spending over 35 years there. Throughout the years, family was the main priority and Don always provided for his family and ensured that the kids had what they needed, or played the sports that they liked. When the grandchildren came, he slowed down on how much he was working to ensure that he could always attend all their school and sporting events. Even when Don and Lorraine travelled to South Padre Island, Texas, Don still took the time to call and see how the kids did in their games. He even learned how to use the computer so he could check emails or updated scores online. Don was fortunate to have someone like Lorraine by his side during his recent health issues, as Lorraine kept a calendar for all hockey, baseball or CFL games so he wouldn't miss anything. Don truly was the most kind-hearted, selfless and loving person you could know. As per Don's wishes there will be no formal service; however, the family wishes you to join them in a celebration of Don's life at a come and go luncheon on Thursday, March 14, 2019. Please drop in anytime between 1:00 p.m. to 3:00 p.m. at the Dugald Community Club, 544 Holland Street, Dugald, MB. Special thanks to Dr. Cam Lowden and all health care professionals that have touched Don and Lorraine's life since 2016. Condolences may be left at seasonsfunerals.ca