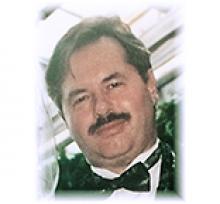 PERCY (RONALD) FRICK "The Travelling Salesman" Ron sadly passed away, at his home, on March 1, 2019. Left to cherish his memory are his beloved wife Lisa, and their sons, Ryan and Adam, his daughter Gina, his grandson Thomas, his brother Ralph (Charlene), nephew Daniel, niece Sabrina; sister-in-law Lee-Ann Case, nephews, Tristan, Taylor and Jaden; brother-in-law Hal Jensen (Crystal), nephews Andrew, Anthony and Ian; cousins, Erik Frick (Rebecca) and Lisa Frick Smith (Bill). Ron was predeceased by his mother Margit in 2006 and his father Percy in 1992. He was also predeceased by his brother Garnet in 1982, as well as his Uncle Helmut and Aunt Helen. Ron was born in Winnipeg and grew up in North Kildonan. He graduated from the University of Winnipeg with a Bachelor's degree in Education, before taking on a career in playing racketball. He travelled to every province and throughout the United States. While in university he was able to play on the University soccer team as well as many other soccer teams. While attending university he played on the Major Junior Hockey team. After graduating from university, he realized teaching was not his thing. His true calling was selling to the lodges and resorts. He had the respect from all the Canadian lodges and resorts. They looked forward to him coming to see them every year. He took time to get to know his clients - not only in a professional capacity but established long lasting friendships along the way. He had the knack of knowing exactly what the client was looking for, and was able to assist with suggesting other ideas that may help them. Ron had been with Kayjet Promotions for over 40 years. His true calling was selling clothing and promotional products. Ron enjoyed travelling to different exotic locations, and one of his favourites was Hawaii. He enjoyed spending time at Lee River; swimming, fishing and just sitting on the deck enjoying the quiet. He was an avid follower of the Montreal Canadiens, Green Bay Packers and the Royal 12A2 White. Viewing will take place at Korban Chapel on Sunday, March 10 from 7:00 p.m. to 9:00 p.m. Refreshments will be served and there will be time to reflect on Ron's life. Funeral services will be at Grace Lutheran Church, 211 Kimberly Avenue at 11:00 a.m., Monday March 11, 2019. Interment will follow at the Transcona Cemetery. Korban Funeral Chapel (204) 956-2193 www.korbanchapel.com