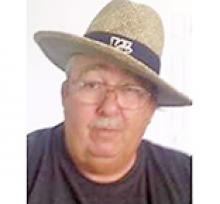 TERRENCE GLEN NELSON August 9, 1949 - March 5, 2019 A larger-than-life father, grandfather, husband and friend, Terrence (Terry) Nelson, passed away peacefully, at Riverview Health Centre, on March 5, 2019, with his three children by his side. Predeceased by his parents, Reginald and Elsie Nelson (nee Weurch), and his brother Dennis, he will be lovingly remembered and missed by his wife Pat, children, Christine (Jesse), Terry (Cynthia) and Angela; grandchildren, Nathan, Myles, Jenaya, Noah, Jalen, Marcus and Analeigh. Additionally, he is survived by siblings, Linda (Dave), Robin (Lori), Wayne (Lucy) and Richard (Cathy); as well as numerous nieces, nephews, cousins and great friends. Having logged over a million miles as a long haul trucker, Terry enjoyed listening to audio books, passionately singing his favourite Gaither gospel songs, and admiring the beautiful and diverse North American landscape. Good natured with an infectious, positive energy, Terry's passions were movies, cards and good conversation. Terry was adored by most who knew him - his generous heart had many friends and family calling him their second dad - and he had so much love to go around, they were more than willing to share. The Nelson family would like to sincerely thank the genuinely compassionate staff at Riverview Health Centre, who took such great care of him during his short time there. The celebration of his life will be held at Springs Church, 725 Lagimodiere Blvd. on Monday, March 11 at 11:00 a.m. In lieu of flowers, donations can be made to the Canadian Cancer Society. Arrangements entrusted to : Rock Fontaine Funeral Director Honour-Respect-Dignity Winnipeg 204-223-2576 or Toll free 1-866-499-2601