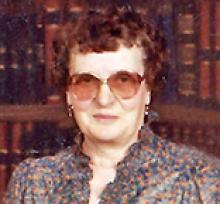 HELEN ALICE MEISNER Peacefully on Sunday, March 10, 2019, with family by her side, Helen Meisner, aged 97 years of Ashern, MB, formerly of Moosehorn, MB, passed away at the Ashern Personal Care Home. Helen is survived by her son Glen (Shirley); four grandchildren, Stacy (Laurel) Meisner, Teresa (Jeff) Olson, Dwayne (Heather) Meisner and Doreen (Rob) Wazel; eight great-grandchildren, Carissa (Morgan), Dylan (Dayna), Sara (Derek), Colton, Halle, Michelle, Krista and Haley, along with one great-great-grandchild Blake McDonnell. She is also survived by her sister Margaret Semler. She was predeceased by her parents, Ludwig and Attilie Schade, husband Edward in 1985, son Gerald in 1979, four brothers and five sisters. Helen was born on June 10, 1921 in Winnipeg, MB, then was raised and lived in Moosehorn, MB. She worked at the Grahamdale Nursing Station for a short time. She married Edward Meisner on November 11, 1943. Together they raised their sons and farmed up until Edward's passing in 1985. Helen continued to live on the farm with the support of family and the home care workers until 2015 when she moved to the Ashern Personal Care Home. A graveside funeral service will be held at 2:00 p.m. on Friday, March 15, 2019 in the Peace Lutheran Cemetery, Moosehorn, MB, with Dawn Tober officiating. A luncheon will follow at 2:30 p.m. in the Peace Lutheran Church basement. Pallbearers will be her great-grandchildren, Carissa, Morgan, Dylan, Sara, Colton and Halle. In lieu of flowers, donations may be made in Helen's memory to the Ashern Personal Care Home, c/o Darlene Hargot, P.O. Box 110, Ashern, Manitoba R0C 0E0. Arrangements by: ARNASON FUNERAL HOME Ashern - Lundar 1.204.768.2072 1.866.323.3593