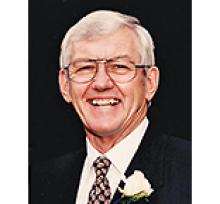 PHILIP MICHAEL HRYHORCHUK April 26, 1932 - March 10, 2019 It is with great sadness we announce his sudden passing, at the age of 86. Born in Ledwyn, Manitoba, Philip was predeceased by his parents, Alexander (Alex) and Anna (Annie) Hryhorchuk, his brother Anton (Tony) (Rose) Hryhorchuk, his in-laws, Gertrude (Gertie) and Thorarinn (Toti) Thorarinson, Jonas Thorarinson, his "good friend" John Rozecki, and many other relatives and friends. Left to cherish his memory are his wife of 62 years, Carol; children: Michael (daughter Sydney), Donna Moauro (sons, Kyle and Sean Caldwell) and Brian (Helen) (son Matthew); brother Dennis (Jackie Davies); sisters-in-law, Valdine (Anton) Peterson and Doreen (Axel) Borgfjord; his "good friends", Stanley (Fjola) Bonkowski and Ken (Norma) Wilcox; as well as numerous nieces, nephews, cousins, and friends. Philip grew up on the farm in Ledwyn. From an early age he was an avid farmer, acquiring a wide range of useful life skills, including logging in the winter, north of Riverton. He loved going to area dances, playing cards with neighbours, and spending time with others. In 1961, he moved from Manitoba and, shortly thereafter, began working at American Motors, which later became Chrysler, in Brampton, Ontario. He retired from Chrysler in 1991 after 30 years, with many sincere friends. In addition to his full-time job, family commitments, and often being his own car mechanic, Philip was very physically active, and never hesitated to help others. He was proud of his heritage and his roots in Ledwyn and Riverton. Philip loved going "home" to the farm in Riverton, each summer, to be with his family and friends. He took great pride in helping out, with local events and projects. Philip loved his family dearly, and later on, especially his role as a proud Grandpa. We will miss his endless love and devotion. The Hryhorchuk family would like to thank Chester Village for their care of Philip, during the latter part of life. In lieu of flowers, donations may be made to Chester Village: https://www.canadahelps.org/en/charities/broadview-foundation/ or a charity of your choice. A celebration of Philip's life will be held this summer in Riverton. He will be greatly missed by all who knew him, but never forgotten. Goda Nott Elskan - Good Night Dear!