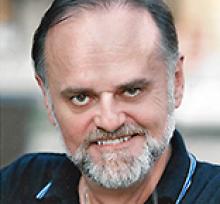 BRIAN PATRICK BURNS For in that sleep of death what dreams may come, When we have shuffled off this mortal coil, Must give us pause. (Hamlet, Act III, Scene 1) It is with heavy hearts we announce Brian Patrick Burns, known prominently by his stage name B. Pat Burns, passed away on February 16, 2019.He is survived by his mother Mary Burns, brother Blaine and wife Jane, nieces, Robin, Rania and nephew Leon, and brother Jeffery and niece Cheryl. Patrick will be dearly missed by his family and the many close friends he touched deeply in his life. A "Celebration of Life" will be held at the Gas Station Theatre in Winnipeg on the evening of May 27, 2019 at 7:00 p.m. Any and all are welcome to celebrate his life with us! As an actor, director, and passionate educator, B. Pat's professional career in the performing arts spanned over 30 years of theatre, dance, film, TV, and multi-disciplinary projects. Among others, he worked with Manitoba Theatre Centre, Prairie Theatre Exchange, Manitoba Theatre for Young People, Theatre Projects Manitoba, Popular Theatre Alliance of Manitoba, the Manitoba Puppet Theatre, the Winnipeg Fringe Festival, the Gas Station Arts Centre, the Association of Community Theatres, the School of Contemporary Dancers, the Manitoba Association of Playwrights, Summer Theatre School Manitoba, and the Manitoba Drama Festival. B. Pat loved to start things, and was a Founding Member of a number of companies including the Actor's Company, the Boardwalk Theatre, Shakespeare in the Ruins (SIR), and the Toronto based Explorational Theatre Co. As an actor, B. Pat's career reflected the diverse tapestry of his interests. From mime, mask, Commedia Dell'Arte and puppetry with Mimeworks, and The Manitoba Puppet Theatre to independent productions such as The Foundation with Canadian choreographic icon Tedd Robinson, Echoes for The Actor's Company, Trial by Bus for Ron Jenkins and Treehouses for Theatre X. He got his start in mainstream theatre at Manitoba Theatre Centre in Miles Potter's 1985 production of Born Yesterday. B. Pat is remembered both as a Founder of Shakespeare In The Ruins (now in its 26th Season) as well as having appeared in SIR's productions of Romeo & Juliet, Macbeth and Much Ado About Nothing. He is also remembered for his work as the Interim Artistic Director of Theatre Projects Manitoba's and appearing in its production of Ce Weekend La. Of his film and television roles, B. Pat was particularly proud to portray Gordon Sinclair Junior in Cowboys & Indians: the Shooting of J.J. Harper, and Lorne Milgaard in Hard Times: The David Milgaard Story. Some of B. Pat's favourite directing credits included The Shawl by David Mamet for Theatre Anywhere, the premiere production of Anniversary by Carol Shields and Dave Williamson at the Gas Station Theatre, Etienne by Steve McIntyre, and SEE BOB RUN by Daniel MacIver for Theatre Projects Manitoba. B. Pat had a lifelong love of dance and physical theatre. He was a frequent coach and teacher at The School of Contemporary Dancers in Winnipeg, helping young dancers to make theatrical breakthroughs in their work. His early work as a member of the Exploratory Theatre Company in Toronto led to the development of theatrical techniques adapted to dance, music, and circus used to help create a wide range of critically acclaimed, award winning national and international productions through Cinetic Creations. B. Pat loved nothing better than working with his students. For him, teaching was an inseparable part of being a professional artist. He taught acting, directing, stage craft, and Shakespeare to thousands of students, mainly in Manitoba, but across the country as well. He taught at MTYP for 14 years and was the founding Director of MTYP's Young Company (now in its 30th year) along with Anne Barager. Among others, he was an instructor at the Academy of Broadcasting, the Summer Theatre School Manitoba, the public school system, and an adjudicator for the Association of Community Theatres Festival. He had a long-running private teaching and coaching practice with many students including a few stars such as the late American-Canadian actress Margo Kidder (of Superman fame). B. Pat also delivered Masterclass workshops in various cities. As a staunch advocate for Manitoba artists and stories, B. Pat served as Chair of the Training Committee of ACTRA Manitoba (Association of Canadian Television and Radio Artists) helping to develop a multi-year training and professional development program and was instrumental in the development and implementation of ACTRA Manitoba's Apprenticeship Program. B. Pat was an Artist's Artist, and a rare teacher who could open doors in the most magical of ways, even for the most unlikely of artists to blossom and flourish. While B. Pat loved his work, it truly was his family and the people he worked with that he loved the most. He had an enduring fascination with the "process of making theatre" in all of its endless permutations, and in how art, spirituality, and life intersect. In his own words, the purpose of making and teaching theatre is: "Above all else the art of teaching compassion for both ourselves and others." B. Pat's warmth, humour, company, and artistry will be deeply missed. In lieu of flowers, donations can be made to The Actors Fund of Canada.