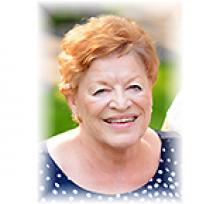 MARJORIE ANN KUSHNIR (née MILLAR) October 30, 1948 - March 22, 2019 It is with great sadness that we announce the sudden passing, on March 22, 2019, of our dearest mom and grandma, Marge, who was surrounded by her loving family. Marge was predeceased by her mother Margaret, fathers, David and Svend, and special brother-in-law Jack. Marge is survived by her beloved daughters, Tamara (Michael) and Sara (Craig), and their father Zenon, along with her five treasured grandchildren: Alexandra, Simon, Charles, Sylvie and Sylvie's soon to be brother or sister. Marge is also survived by her sisters, Valery and Anna (Peter), niece Kelsey (Dylan), and nephews, David, Jason (Marcie), and their children. Our mom was born in Hamiota on October 30, 1948 before moving to Winnipeg. Mom spent fond summers as a young girl in Birtle, peeling potatoes in Aunt Winnie's restaurant and spending time at Uncle Lloyd and Aunt Nessie's farm. Mom had a long career with MTS where she made many special friends. After retiring from MTS, Mom spent her time continuing her life's passion of caring for her daughters and grandchildren. The family would like to thank the doctors and nurses of St. Boniface ICU for their efforts to aid our dearly loved mom. Funeral Divine Liturgy will be celebrated by Very Rev. Fr. Mark Gnutel at 10:30 a.m. on Thursday, March 28 at St. Anne Ukrainian Catholic Church, 35 Marcie St., followed by interment at Glen Eden Cemetery. In lieu of flowers, due to the love Grandma Marge had for her grandchildren, donations may be made to IHM Lubov Nursery School or the children's charity of your choice. VICHNAYA PAMYAT KORBAN FUNERAL CHAPEL 204-956-2193 www.korbanchapel.com