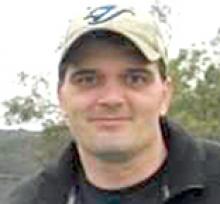 CHRISTOPHER LEE MARKWART August 26, 1968 - March 23, 2019 Peacefully at the Portage District General Hospital, Portage la Prairie, MB on Saturday, March 23, 2019, Chris passed away at the age of 50. Chris is predeceased by his parents, Norman Markwart and Margaret Markwart (Holloway). He is survived by his son Joseph; siblings, Robin, Donna and Jason; stepmother Beverley; and stepsisters, Sandra and Heather. Chris was raised on the family farm in the Camper/Ashern area where he learned the value of a hard day's work and acquired many good skills. As a youth, Chris enjoyed curling, 4-H, hunting, fishing, sports and having all sorts of adventures with his many friends. He attended the University of Manitoba, worked for Cargill and Maple Leaf and lived in Winnipeg, Niverville, and finally Lions Prairie Manor in Portage la Prairie where he bravely battled multiple sclerosis. He would tell you his happiest times in life would be when spending time with his son Joe. His family would like to extend their heartfelt thanks to the staff at Lions Prairie Manor for the exceptional care given to Chris. Cremation has taken place and a memorial service will be held at 1:00 p.m. on Friday, March 29, 2019, at the Ashern Legion Hall, Ashern, MB with Dawn Tober officiating. Service will conclude at the hall with a lunch to follow. An interment will be held at a later date. In lieu of flowers, memorial donations may be made to the Multiple Sclerosis Society of Canada - Manitoba Division, 825 Sherbrook Street, Winnipeg, MB R3A 1M5. Arrangements by: ARNASON FUNERAL HOME Ashern - Lundar 1-204-768-2072 1-866-323-3593