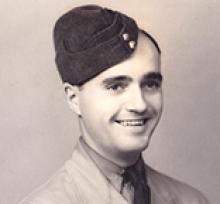 C. W. BUCKINGHAM, QC The family of Cy Buckingham are sad to announce that he passed away peacefully, Wednesday, March 20, 2019, at Deer Lodge Centre. Predeceased by loving wife Esther, after 64 years of marriage, he is survived by daughter Susan (Steve); son Phil (Pat); grandson Tyler (Wan); granddaughters, Madelaine and Rachael (Randall); and great-granddaughter Ava. Also survived by niece Judy Ripley and nephew Philip Dodd. Dad was born in Brandon on May 20, 1917, the only child of Gordon and Nora Buckingham. When war was declared, he was quick to enlist in the RCAF and spent 1939 to 1945 in the UK as a radar instructor. Upon his return in 1945, Dad and fellow veterans enrolled in a special accelerated law school program at the U. of M. After graduation, he started his law career in Brandon, moving to Virden in 1955. Dad was proud to receive his Queen's Counsel (an honour recognizing exceptional professional ability) from then attorney general Roland Penner. Mom and Dad embraced life in Virden, making many lifelong friends. They spent many years taking vacations with their great friends, Doug and Vera Bollman, then became snowbirds travelling each winter to their place in Weslaco, Texas. Dad was an enthusiastic golfer, and was over the moon when he scored a hole-in-one at the Virden Wellview Golf Club. Mom and Dad moved to 400 Osborne Street, Winnipeg in 2001, meeting some old and many new friends. The folks there put on a special party for his 100th birthday which was greatly appreciated. Dad always loved gadgets and new things, embracing the internet when he got his first computer in his 80's. Dad drove his car well into his 90's and was still living on his own until he was 99, quite an amazing man! Thanks to Karen Murphy and staff on tower six Deer Lodge Centre for the compassionate care that Dad received. Thanks are also due to Veterans Affairs who bent over backwards to assist Dad for the last few years of his life. A private interment will be held at a later date at Chapel Lawn Funeral Home.