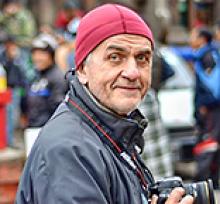 Peacefully, after a valiant fight against a second round of cancer, Ron passed away at the age of 69 on Sunday, March 31, 2019 at St. Boniface Hospital, with his family and friends by his side.
Predeceased by his parents, Bill and Marcie Basarab, and his sister and brother-in-law, Sue and Ken Gulenchyn, Ron leaves to cherish his memory his children, Sloane Drennan (T.J.), Ben and Adam (Erin Dodd); his grandchildren, Tommy and Keeley Drennan; his partner, Brenda Yip; her children, Tyler (Anna Bond), Derek and Sarah Longe (Jamie); and her grandchildren, Asher and Jonah Yip. Also mourning his passing are his sister and brother-in-law, Karen and Don Mellor; his niece and nephews; and numerous extended family and friends, including the mother of his children, Carole Wylie.
Born May 22, 1949 at St. Boniface Hospital in Winnipeg, Ron and his parents moved to Toronto, Ontario before his first birthday. Ron spent his childhood on Pears Avenue off Avenue Road and welcomed two sisters before moving back to Winnipeg and settling in Transcona when he was 14 years old. After graduating from Transcona Collegiate in 1965, Ron obtained his Bachelor in Environmental Studies from the University of Manitoba in 1972, followed by his Masters of Architecture in 1975. Ron never retired from being an architect, working for many firms in Winnipeg, including his own, throughout his career, and on some significant projects, including the Bell MTS Place. Ron was an active member of the Winnipeg Rowing Club where he made many lifelong friends. Ron was an avid adventurer, attending the Canadian Grand Prix in Montreal; rowing the Mississippi River from Cairo, IL to Baton Rouge, LA; touring the Great Wall of China; climbing to the base camp of Mt. Everest; and most recently going around the world in 26 days on the Trans-Siberian Railway through China, Mongolia and Russia.
Our family would like to extend our heartfelt thanks to the staff at St. Boniface's Palliative Care floor, especially Doctors Ted St. Godard and Kelvin Tran, and Dustin, Lana, Charis, Janet, Nancy and Jody, among many others, who provided such loving care of Ron in his final days. We are also grateful to Ted and Janice Dodd, and John Wintrup for their unwavering support during this time.
Memorial Mass will be celebrated on Wednesday, April 10, 2019 at 10:00 a.m. at St. Mary's Cathedral, 353 St. Mary Ave., Winnipeg with reception to follow in the Hall.
In lieu of flowers, donations in Ron's name to CancerCare Manitoba (https://www.cancercarefdn.mb.ca/) or the St Boniface Hospital Foundation (https://stbhf.ca/en/donate/) would be greatly appreciated.

Peacefully on Sunday, March 31, 2019.
Memorial Mass will be celebrated on Wednesday, April 10, 2019 at 10:00 a.m. at St. Mary's Cathedral, 353 St. Mary Avenue, Winnipeg with reception to follow in the Hall.
Longer obituary to follow in Saturday's edition.