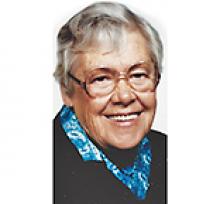 Suddenly, though peacefully, on April 3, 2019, Eleanor Juer, aged 94 years of Ashern, MB, passed away at the Ashern Personal Care Home.
Eleanor is survived by her daughters, Phyllis Falk, Sandra Juer (Bruce Pottinger) and Val (Laurie) Kerbrat; her sister Sheila (Oscar) Johnson; five grandchildren, Michael and Mark Dmyertko, Trent Monk, Michelle and Nicole Kowalchuk; sister-in-law Louise Price; sons-in-law, Garth (Kim) Monk and Ron Kowalchuk; along with numerous nieces and nephews.
She is predeceased by her husband Ralph; daughters, Bernice Monk and Karen Juer, brothers-in-law, Walter Juer, Clifford Juer and Brian Juer and her parents, Percy and Mary Scott.
Mom was born on April 4, 1924 in Winnipeg, MB and lived there until she met and married Ralph in January 3, 1956. They then moved to Mulvihill, MB for a short time. They settled in Camper, MB and started their farm operation. While Dad tended to the farm, Mom was busy raising their family, baked wonderful bread, was a great cook, loved spending time in her flower and vegetable gardens and enjoyed going to bingo at Camper Hall. She likely never missed an episode of Coronation Street, though.
In their later years, Mom and Dad would travel to Arizona for the winter months, which they did for many years. In 1993, they sold the farm and moved to Ashern into the Glencora Estates. After Dad's passing in 1994, Mom continued to reside at Glencora for a few years, then moved to the Ashern Personal Care Home where she lived until her passing.
The church was always very important to our mom and she faithfully attended Sunday services at the Ashern Gospel Chapel.
A funeral service will be held at 1:00 p.m. on Monday, April 8, 2019 in the Ashern Gospel Chapel with Ruben Goertzen officiating. A luncheon will follow in the Ashern Gospel Chapel. Interment will then take place in the Camper Cemetery.
Pallbearers will be Mark Dmyterko, Trent Monk, Garth Monk, Laurie Kerbrat, Michael Dmyterko and Bruce Pottinger.
We would like to thank the staff of the Ashern Personal Care Home who took such wonderful care of our Mom.
In lieu of flowers, donations may be made to the Ashern Personal Care Home, c/o Darlene Hargot, PO Box 110, Ashern, Manitoba, R0C 0E0.