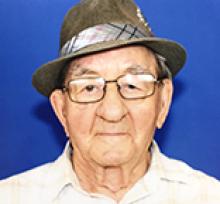 
With profound sadness, we announce the passing of Marcel Roland Bernard Ayotte at Actionmarguerite, Saint-Vital, on April 9, 2019. He was a loving and devoted husband, father, grandfather, great-grandfather, and friend to all.
He leaves to mourn in his passing his two daughters, Mona-Lynne Ayotte, and Michèle Cadieux (Bob); his grandchildren, Samantha Howden (Luca Chandler), Julie French (Kelcey), Aimée Cadieux (Leigh Lange), Kerry Cadieux (Brittany); his great-grandchildren, Taylor and Campbell French (Julie), Mackenzie Rodewald, Emmett and Vivian Lange (Aimée), Reegan, Chyler and Nolan Cadieux (Kerry); his brother René (Lucille), his sister-in-laws, Annette Coates (Clifford) and Irène Marchand (Ernie).
Bernard was predeceased by his wife Yvonne in 2011; his father Louis Philippe Ayotte and his mother Marie-Louise (Bissonnette); his sisters, Florence Fortier (Roméo), Jeanne Brunet (Émile), Claire Dansereau (Omer), Lucille Johnson (Henry), Évangeline Ayotte; two brothers, Claude (Hortense) and Roméo; his in-laws, Ernie Marchand (Irène), Eva Leclair (Amedée), Florina Delaquis (Marcel), Arthur Marchand (José), Alphonse (Lucie), and Léo Marchand (Hélène).
Bernard was the first son born on the family farm in St. Jean Baptiste, Manitoba. Dad valued education, and attended Whitehaven School, Collège St. Jean Baptiste, and St. Boniface College. He served with distinction in many municipal and provincial posts ranging from Municipal Administrator for the Rural Municipality of Montcalm from 1948 to 1978. He served as President of the Association of Manitoba Municipalities in 1965 and 1966. He was instrumental in setting up a four year certificate course in 1966, which was approved and sponsored by The Municipal Administrator's Association, the Department of Municipal Affairs, and the Province of Manitoba. He was also the Chairman of the Board of Certification for the Municipal Administrator Program, which was delivered through the Adult Education Department of the University of Manitoba. He was Secretary-Treasurer of the Letellier Athletic Association for 28 years, as well as a beloved bilingual Bingo caller! Bernard was a Board member of the Manitoba Flood Disaster Assistance Program for the Province of Manitoba after the flood of 1979, and co-ordinator and editor of the Centennial Book Reapers of the Valley for the Rural Municipality of Montcalm in 1982. In 1989, he headed an exhaustive survey of the Red River Valley flood area in eight municipalities and part of Winnipeg.
He married his beloved wife Yvonne in 1950 and lived in Letellier, Manitoba for 20 years, retiring from the Municipality of Montcalm in 1978. He joined the Knights of Columbus, Provencher Council in 1955 and helped organize the Montcalm Council chapter to which he belonged. He transferred to the St. Eugène Council in 1981, as a 3rd degree member and recorder for 10 years and was exemplified as a Sir Knight 4th Degree within "l'Assemblée Monseigneur Taché"; for which he served as faithful treasurer for 10 years. He devoted almost 20 years to performing the role of Chancellor to 1st and 2nd degree teams, still doing this by heart at the age of 88!
In his leisure hours, he enjoyed curling, gardening, fishing, golfing and cooking. To top off all of his achievements in the fall of 2002, he joined and acted in Le Théâtre des Ainés. Bernard, an impeccable dresser and lover of hats, was a positive, well-respected and loved man with a sense of humour, which he employed daily. He had a facility with words, writing many speeches for a number of events. One of his rare gifts was to listen actively to many with an open and compassionate heart.
The family would like to thank the care home staff of Actionmarguerite, Saint-Vital, and in particular nurses Mac, Carla, Aga, Olivia, and Karen who cared for him over the last number of years as he displayed a remarkable strong independence. Dad was well known by all staff as he volunteered at Foyer Valade for many years enjoying the musical Wednesday afternoon activities! We would also like to thank the Knights of Columbus who will be present serving as "la garde d'honneur."
In keeping with Bernard's wishes, cremation has taken place and a Funeral Mass celebrating his life will be held on Saturday, April 27, 2019 at 10:00 a.m. at St. Eugène Catholic Church, 1009 St. Mary's Road, Winnipeg, Manitoba.
Honorary pallbearers will be his nephews, Roland Ayotte, Gabriel Ayotte, Laurent Dansereau, Jacques Dansereau, Roger Ayotte, Richard Ayotte, and Marcel Brunet.
In lieu of flowers, donations may be made to the Heart & Stroke Foundation of Manitoba.
A private interment will follow at a later date.


It is with great sadness that the family announces the peaceful passing of Bernard, at the age of 101 years old.
A memorial service is currently being planned for April 27, 2019 at 10:00 a.m., at St. Eugène Catholic Church.
A longer obituary will follow.