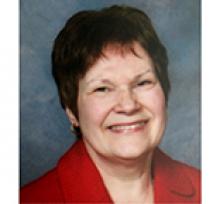 Peacefully on January 2, surrounded by her family, heaven welcomed Donna and took her under its wing as their angel.
Donna is survived by her husband of 45 years, Robert; daughter Jennifer (Paul); son Matthew (Krystelle); granddaughter Katherina; brother William (Carol); and sister Christine (Reiner), as well as many nieces and nephews.
She was predeceased by her parents, Rev. Proto Deacon Michael Woroby and Olga Woroby; son Andrew; and in-laws, Olga and John Wiwchar.
Mom was born on January 31, 1949, to a strongly devote Ukrainian Catholic family. She attended Aberdeen School, Ralph Brown, and Isaac Newton for her elementary and middle years, then IHMS for grades 9 to 11 and in 1967 graduated grade 12 from St. Mary's Academy. She then went on to obtain her B.A. from St. Paul's College and Certificate of Education from the University of Manitoba.
She began her career employed as a teacher with the #1 School Division from 1971 to 1977, teaching grade 2 at Ralph Brown school from 1971 to 1976. It was during that time that she married Robert in July 1973 and shortly thereafter was blessed with two beautiful children, Jennifer and Matthew. She continued her career as a working mom and after her children were older returned to the educational field with the Seven Oaks School Division in R.F. Morrison School's Ukrainian Bilingual program as an educational assistant, working with special needs students from 1990 until retirement in 2012.
Donna was actively involved in many facets of the Ukrainian community and her faith. She notably served on the Springfield Heights Parents Committee, Board of Directors for the Rozmai Ukrainian Dance Ensemble, Rosary leader at St. Nicholas Ukrainian Catholic Church, corresponding secretary for the UCWLC of St. Nicholas, recently receiving her 15 year membership pin in 2017, and was a member of the Millenium Choir, singing for Pope John Paul's II visit to Winnipeg. It was also with the Millenium Choir in 1988, that she participated in singing the Divine Liturgy at St. Peter's Basilica in Rome, joining other choirs to sing the Divine Liturgy in the Ukrainian language for the first time in the Basilica.
In between her career and volunteering, mom was constantly cooking and feeding our friends and family during their visits. She was always the last to go to bed and the first to wake up as we would note by if the oven light was still on. Mom's approach to life was always positive and grounded and, on many occasions, she listened more than anything. She enjoyed learning and exploring new things, most especially in the food and holistic world and wherever possible incorporated her creativity whether it be into problem solving, gardening, craft projects or greeting cards.
Upon retirement, Donna enjoyed travelling to New York, Las Vegas, Kelowna, Portugal and a Caribbean Cruise with friends, as well as many shopping trips to the states with Robert and family. She also spent her time helping her children with their homes and time sharing the Ukrainian culture with her granddaughter.
The family would like to extend a special thank-you to Doctors, Fred, Chris and Andy for their compassionate care, and to Carol Scott, O.T., Suzette, the ALS Society and to all the caregivers.
A sincere thank you to Bishop Michael Wiwchar CSsr and Rev. Father Isidore Dziadyk OSBM for all their prayers and divine liturgies. Robert and family would like to thank all that have offered prayers, liturgies, company and food during the past few years. Most especially mom's special angels, your kind thoughts, words and prayer offerings have made all the difference during this time.
Flowers are gratefully declined, and in lieu, donations are graciously appreciated towards the ALS Society of Manitoba, Lubov Foundation, in care of IHMS School, info@lubovfoundation.ca and the St. Nicholas Ukrainian Catholic Church Maintenance Fund.
A private funeral Divine Liturgy service and interment has been held.

"Eternal rest grant unto her O Lord and
let perpetual light shine upon her."