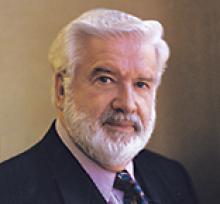 
Family and friends of Laurie Mainster are deeply saddened by his passing on Monday, April 8, 2019.
Beloved son of Arthur and Fannie, the youngest of six children, Laurie is survived by daughter Gail Mainster, son-in-law Harold Gutovich and grandson Jay Gutovich (Sara); son Samuel Mainster; son-in-law Viktor Lewin; granddaughter Brianne Lewin, partner Chris Schwab and great-grandson Abraham; grandson Eli Lewin; great-granddaughters, Reah Shine Cheryl and Zoey Riley Dawn Lewin, and numerous loving nieces, nephews and other extended family members and friends. Laurie was predeceased by his daughter Cheryl Lewin, on January 19, 2010, and his wife Bernice (Bayla, née Claman) of Saskatoon, Saskatchewan on April 9, 2017.
Laurie was born in Winnipeg on September 18, 1925. He attended the I.L. Peretz Folk School and graduated from St. John's Tech High School, where he was a popular athlete and renowned for his hard work, even as a child, delivering newspapers. He served in the R.C.A.F. during the Second World War as a wireless operator, leaving with the rank of sergeant. Laurie married Bernice on November 27, 1948 and was married to her for more than 68 years. Laurie started his career selling advertising for the Winnipeg Free Press Weekly Farmer, followed by positions with J.J. Gibbons Ltd. and other agencies until he joined Foster Advertising Ltd. as Winnipeg manager in 1962. While with Foster, he helped organize The Spirit of '70 centennial celebrations for the Province of Manitoba and made Foster the agency of record for the province's Ministry of Industry and Commerce. He was also an advisor to the late Dufferin "Duff" Roblin during Roblin's tenure as Manitoba premier from 1958 to 1967. After leaving Foster in 1986 as Executive Vice President overseeing operations for all of Western Canada, Laurie continued to run his own agency, Laurie A. Mainster Advertising Ltd.
Laurie was known for his overwhelming efforts for the betterment of all levels of his community. He participated actively in promoting his city and province and donated much of his time on behalf of charitable and not-for-profit causes. His notable positions included: Director, City of Winnipeg Library Foundation; all offices up to and including President of the Central Canadian Council of B'nai Brith; President and member of the Board of Governors, I.L. Peretz Folk School; President and member of Executive/Board of Directors, Winnipeg Jewish Theatre; President, Rosh Pina Synagogue; Marketing / Public Relations Chairman, Asper Jewish Community Campus of Winnipeg Capital Building Campaign; President, Rainbow Stage Productions; Chair, I.L. Peretz Folk School 90th Anniversary Reunion, August 1 - 4, 2003; and co-producer, Mameloshen: Festival of Yiddish Entertainment and Culture. Laurie was also a member of the following organizations: Board of Directors and Executive Committee, Health Sciences Centre Foundation; Jewish National Fund Board of Directors; Jewish Foundation of Manitoba Board of Governors; Jewish Heritage Centre of Western Canada Board of Directors; Canadian Friends of Hebrew University; Canadian Associates of Ben Gurion University of the Negev Board of Governors; Congregation Etz Chayim; Variety Club of Winnipeg; Winnipeg Football Club Board of Directors; Seven Oaks General Hospital Foundation; Winnipeg Symphony Orchestra Board of Directors; General Monash Branch Royal Canadian Legion; and Canadian Associates of Technion - Israel Institute of Technology.
Laurie's many community service awards included the Advertising Association of Winnipeg 1993 Director's Award; Honorary Directorate from the Health Sciences Centre Foundation; plaque in honour of his efforts in The Spirit of '70 Campaign, Province of Manitoba; recognition of his work producing the official opening program for the Winnipeg Convention Centre in 1975; certificates of appreciation from the City of Winnipeg "For his selfless dedication and outstanding contribution to the success of Rainbow Stage" and from the Seven Oaks General Hospital Foundation; certificate in recognition of his "...years of leadership and dedication in support of the Jewish Heritage Centre of Western Canada"; the Winnipeg Jewish Community Council Shem Tov Award in 1997 for his role as marketing/public relations chair for the Asper Jewish Community Campus; Special Community Award from State of Israel Bonds in celebration of Israel's 50th Anniversary in 1998; special tribute in 2000 from the Jewish Foundation of Manitoba in recognition of "30 Years in the Life of the Community" and 30 years of volunteer service to the Foundation; and 2014 Shem Tov Award on behalf of the Rady Jewish Community Centre. He was a key fundraiser and organizer for the I. L. Peretz Folk School Yiddish Teaching Fellowship at the University of Manitoba and was active in organizing the Hebrew Congregation of Winnipeg Beach, a popular Saturday morning synagogue for many Jewish Winnipeggers.
Funeral services were held at Congregation Etz Chayim on Wednesday, April 10 and graveside at the Hebrew Sick Cemetery, led by Cantor Tracy Kasner Greaves. Pallbearers were Harold Gutovich, Shalom Coodin, Sheppy Coodin, Chaim Raber, David Coodin and Bernie Sucharov. Honorary pallbearers were Viktor Lewin, Chris Schwab, Dvora and Marshall Braunstein and Joel Dudeck.
Thank you to everyone at the Saul and Claribel Simkin Centre and especially to Marilyn Roldan and other caregivers and staff from Friendly Caregiver Seniors Care.
Donations to honour Laurie can be made to the Bayla and Laurie Mainster Family Trust Fund and the Laurie Mainster Community Visionary Fund at the Jewish Foundation of Manitoba.