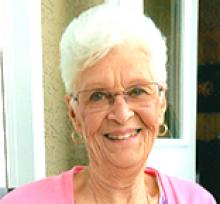 It is with great sadness that we announce the passing of our beloved mother, grandmother, great-grandmother, sister and aunt. Carol passed away on Tuesday, April 23, 2019 at the age of 89 years.
Carol was predeceased by her husband
David E. Jones, her parents, Joseph and Ella Lambert, brother Don Lambert, sister Ruth Sicotte and good friend Jim Brooks.
Carol was born in Gravelbourg,
Saskatchewan on July 5, 1929. She moved to Transcona in 1941 where she started working at the Eaton's Mail Order as well as Gray's Ladies Wear in her later years. In 1950 she married the love of her life, David Jones and was blessed with two children, Debra and Randy. Her career extended to be a lake mom at Ottermere where she enjoyed the better part of life with taking the campers special on weekends, summer break with the children, to retirement for many years. She was known to all at the lake lovingly as "Mrs. Clean".
Left to cherish her memory are daughter Debra, son Randy (Terry), grandchildren, Lindsay (Dustin), David, Jonathon, Sarah (Erik), Daniel, great-grandchildren Evan, Taylor, Hayden, Jed, Brielle and Jayce. She is also survived by her sister Diane Reid, sisters -in-law, Helen Jones and Irene Staub and brother-in-law Ray Staub and numerous
nieces and nephews.
Special thank you to Middlechurch Home for all their support and care during Mom's stay.
As per Mom's wishes, a private interment was held at Transcona Cemetery.
Flowers are gratefully declined. Please send a donation to a charity of your choice in her memory.

We love you so much Mom
No more worries