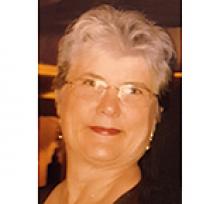 It is with sadness in our hearts that we announce the passing of Pat Whiteside on Monday, April 22, 2019, at the Pinawa Hospital, at the age of 73 years. Her family were at her side. She has taken her place in heaven with the Angels.
Pat will be forever missed by her husband of 52 years, Terry, sons, Grant and Sean (Trena) and her grandchildren, Kayla and Devon, brother Ron Hunt, and numerous nieces, nephews and friends.
She was predeceased by her father Charles, mother Cecile, and brother Harry Hunt.
Pat was born on June 7, 1945 in Whitemouth, and as an early teenager the family moved to Winnipeg where they resided in Elmwood. She attended Elmwood High School, and upon graduating entered nurses training at the Grace Hospital, graduating in 1966. While in high school she met and fell in love with her husband Terry, and after her graduation from nursing, they married. Terry was in the U.S. Navy at the time, so she accompanied him to Newport, Rhode Island where they resided until his discharge. They then returned to Winnipeg in 1968, residing in Elmwood. In 1977 they moved to the Cooks Creek/Oakbank area where she could fulfil her desire for horseback riding.
Pat spent most of her nursing career at the Concordia Hospital in the Emergency Department, retiring in 1999. Terry and Pat then built a new home in the Lac du Bonnet area, where they resided until her passing. She loved the lake life, her gardening of both flowers and vegetables. She always thought of others and was considerate of their feeling and choices, always willing to help if friends or family were in need. Her greatest joy was watching her precious grandchildren in all their activities especially Ukrainian dancing and hockey. She loved to travel, and visited several countries around the world, and going south in their motorhome during the colder winter months.
The family wishes to express its appreciation to the doctors and nursing staff at Pinawa and Beausejour general hospitals for their dedicated service in assisting Pat during her most difficult times.
Cremation has taken place and a celebration of Pat's life will be held at a later date.
If friends wish a donation may be made to a charity of their choice in Pat's memory