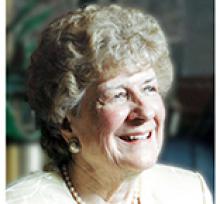 After suffering from Alzheimer's, it is with sadness that the family announces the passing of our beloved mother, wife and grandmother, Doreen Roberta Anderson, on April 16, 2019.
Left with many fond memories are her children, John, Grant, Laura (Dave), Dianne; and grandchildren, Devan, Annie and Shayla. She also leaves behind her brother David (Carolyn), sister Margaret; along with several nephews and nieces.
She was predeceased by her husband of 50 years, George; parents, Lydia and Stanley; and daughter-in-law Lorene.
Dodie, as Mom was affectionately known, was born in Yorkton, Saskatchewan on October 26, 1928. The family moved to Winnipeg where she remained for the rest of her life. She attended Grosvenor School, Robert H. Smith, Kelvin High and United College (later to become University of Winnipeg). Dodie worked at Great West Life until the birth of her first child.
George and Dodie settled in Fort Garry where Mom remained for almost 60 years. Dodie was a kind, smart and extremely pragmatic woman with a great sense of humour and fun. She was an expert seamstress, churning out 100's of stylish outfits; including beautiful wedding dresses for both daughters and dresses for their bridesmaids. Her culinary skills were legendary amongst family, friends and neighbours. A meal at Dodie's was always something to look forward to. She was a loving Nana creating special bonds and memories with her grandchildren. She will forever hold a special place in all our hearts.
The family would like to thank the staff at Lions Manor for the care received over the last four years. At Mom's request, no service will be held. A private family memorial will take place at a later date.
Donations in Doreen's memory may be made to a charity of your choice.