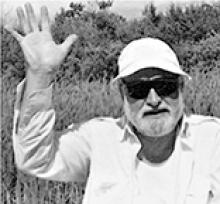 It is with great sadness that we said goodbye to our beloved husband, father and grandfather, Bernie, on April 23, 2019.
Bernie was born in the community of Howden, Manitoba on May 26, 1930, where he worked on the family farm until leaving to work for the railway and then highways.
Later, while working with Fort Garry Public Works, Bernie met his future wife Jan. They married on August 15, 1953, and in 2018 celebrated their 65th wedding anniversary.
As Bernie and Jan started their family, he left Public Works to join the Fort Garry Fire Department. Bernie remained a Firefighter until his retirement as a Captain from the Winnipeg Fire Department in 1988.
After retirement, Bernie and Jan enjoyed numerous bus tours and road trips, covering the length and breadth of North America.
Bernie loved the outdoors and was an avid and skilled hunter and fisherman, winning several Master Angler awards as well as awards for hunting as a member of the Fort Garry Game & Fish Association. Bernie's love of the outdoors was infectious, as all four of his children and grandchildren grew to share that love. His 'Fish Call' was legendary and almost always guaranteed a good catch of walleye!
Memories of times spent at the cottage he built at Victoria Beach will be cherished forever by Mom, children, grandchildren, friends and neighbours alike.
Bernie took up golf at age 69, and Mom started golfing shortly after. So many afternoons were enjoyed at Beaches Golf Course, playing and laughing until everyone's sides ached.
Bernie could make people laugh effortlessly. This made him a favourite on golf and fishing trips with his sons and friends, and he always looked forward to deer camp each fall and the annual Bart Boys Fishing Weekends.
Bernie faced his health problems over the years with an unwavering positive attitude. During his many medical visits he would be heard humming and joking with staff, threatening that he would be back and to take care. He was sustained by his love of life, his family and his friends. He never lost his sense of humour.
Bernie leaves to mourn his wife of over 65 years, Jan; sons, Dan (Faith), Mike (Carol) and Ron; daughter Sharon; daughter-in-law Brenda; and cherished grandchildren, Jason (Lindsay), Laura, Alex (Kelley), Andrew, Duncan, Callie and Jillian. He also leaves his brother Richard (Katherine); sister Alice; sisters-in-law, Lil and Fran (Bob); and brother-in-law Rick; as well as numerous cousins, nieces, and nephews.
Bernie was predeceased by his parents, Paul and Pearl Bartmanovich; sisters, Agnes and Madeline; brothers, Stanley and Adam; and nephew Jeffrey.
Bernie's family would like to thank CancerCare Manitoba, the W.R.H.A. Palliative Care team for their compassionate and professional care, and all healthcare professionals who had a role in his care over the years.
At Bernie's request, cremation has taken place.
In lieu of flowers, donations to CancerCare Manitoba are appreciated.
A celebration of Bernie will be held on Sunday, May 5, 2019 from 1:00 p.m. to 4:00 p.m. at the Transcona Legion, 117 Regent Avenue East in Winnipeg. We invite all family and friends to join us for this come-and-go.

Bernie, we hope that Heaven is
"Just like Downtown!"