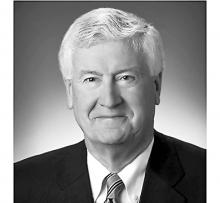 
It is with great sadness that we announce the passing of Michael Everett Joseph Phelps, aged 71, on Saturday, April 20, 2019.
Michael is gone too soon, but his was a life very well lived. He loved his family with every ounce of his heart, worked tirelessly in pursuit of his dreams, studied history and nature with unrelenting curiosity, and took immense joy in life's simplest pleasures and greatest adventures alike; every meal he ate was his favourite, every place he visited was without compare, every friend he had was "just the best."
Michael's many gifts served him well. He began his career in public service and later climbed to the heights of the private sector. Throughout his life, Michael explored his passion for the world around him through travel, history, reading, food and wine.
He was born on June 27, 1947, in Montreal, Quebec to Arthur and Hendrina (nee Van de Roer) Phelps. When he was 13, they moved to Winnipeg, Manitoba with his siblings, Stephen, John and Maria, and soon welcomed another sister, Monica. Michael thrived in school, skipping two grades and graduating from St. Paul's High School when he was just 16. He went on to complete his Bachelor of Arts at the University of Winnipeg and a Bachelor of Laws at the University of Manitoba, before earning a Master of Laws at the London School of Economics.
An endlessly proud Canadian, Michael entered public service as a crown attorney in Winnipeg, followed by a turn in private practice at Christie Turner DeGraves. He later moved on to the Federal Government in Ottawa, where he worked as a Senior Advisor to the Minister of Justice, and then as Executive Assistant to the Minister of Energy.
In 1982, he moved to Vancouver to join what was then Westcoast Transmission as Special Advisor to the President. In 1987, he was appointed as President and CEO at the newly renamed Westcoast Energy – assuming oversight of the company at just 40 years old.
Under Michael's leadership, Westcoast Energy grew from $2 billion in assets to more than $10 billion. In 2001, he helped engineer the company's acquisition by Duke Energy. Michael remained on the Board of Duke, which later spun off its natural gas business as Spectra Energy, and was ultimately acquired by Enbridge Inc. in 2017. In 2002, he founded and served as Chairman of Dornoch Capital, a private investment company. Michael also served on numerous corporate Boards - including Enbridge, Marathon Oil, the Canadian Imperial Bank of Commerce, Canadian Pacific Railway, Canfor and Teine Energy, among others - and enjoyed the opportunity it afforded him to work alongside talented leaders of diverse expertise.
Michael was exceedingly grateful for his life's many blessings and eagerly gave back to his community and country. He served as the Chairman of the Vancouver General Hospital & UBC Hospital Foundation for many years, and was on the Board of the Vancouver Olympic Organizing Committee in 2010. In 2003, he was appointed by the Federal Government to chair The Wise Persons' Committee, a panel developed to review Canada's system of securities regulation. In 2001, Michael was appointed an Officer of the Order of Canada.
While his professional and public accomplishments were many, his life and joy - literally - were his family. He met his great love, Joy Slimmon, at the age of 13, when he moved next door to her. They married at 23, and welcomed daughters, Erica, Julia and Lindsay, whom - after Joy - were his everything.
That was until his grandchildren arrived. Owen, Jake, Miles, Sawyer, Reese, Luke, George and Felix were an incredible source of happiness for Michael, as he got to share his passions for travel, museums, food, golf, skiing, Africa, military history, aviation, watches and more with them. They, in turn, were completely devoted to their Papa, who lives on in them in so many ways.
Michael is survived by his loving wife of nearly 49 years, Joy, and his daughters, Erica, Julia and Lindsay. In addition, he leaves behind his loving sons-in-law: Erica's husband, John McParland; Julia's husband Mark Jafar; and Lindsay's husband Vince Marcotte, and eight grandchildren ages one to 13. He is also survived by his brother John, sisters, Maria and Monica, in addition to his sisters-in-law, brothers-in-law, and several nieces and nephews he loved as his own. He was predeceased by his parents, brother Stephen, his sister-in-law Marguerite Cory, and mother- and father-in-law, Glenora and Donald Slimmon.
A celebration of Michael's life will be held on May 22, 2019, at 1:00 p.m. in the Pacific Ballroom at the Fairmont Hotel Vancouver.
In lieu of flowers, the family would greatly appreciate any donations to the Lions Gate Hospital Foundation, VGH & UBC Hospital Foundation, the BC Cancer Foundation, or the Lion Recovery Fund of Africa.