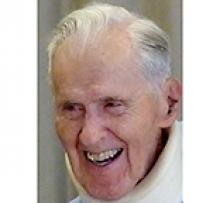 After a life well lived, on April 25, 2019, Bohdan "Bud" Danylchuk passed away peacefully at the age of 92.
Survived by his beloved wife of 69 years, Flora, his children, BJ, Kim (Micheline), Andrew (Dawn Marie), Brent (Melissa) and Joy, his grandchildren, Mark, Lisa, Steven, Kassandra, Emily, Regan, Wendy, Piper, Ryan and Erika, and many nieces and nephews and their families.
Predeceased by his parents, William and Sophia (Moroziuk), and siblings, Al (Paula), Bessie (Walter) Bilych, Mickie (John) Popowich, Ollie (Bill) Beyak and Mary (Theo) Eliuk.
Bud was born in Sandilands, Manitoba, the youngest of his family. The family later moved to Canora, Saskatchewan, where Bud completed his grade and high school. Bud then attended Normal School (now called Teachers College) in Winnipeg, where he both qualified as a teacher and met and fell in love with Flora, the love of his life. Bud and Flora married in 1950, and taught together in Woodnorth, Manitoba.
Bud was a gifted athlete. As a teenager, he did long distance running each day to get to and from school several miles away. As a newlywed, he played ball competitively in various regional leagues and was a stellar pitcher. He was scouted and asked to join the St. Louis Cardinal organization, but his brother and father convinced him that he needed to follow a different path that provided more self-determination and security for him and his family. Bud decided a professional life was his future, and in 1953 entered university, first the University of Manitoba (1953 to 1956) for a BSc degree, and then the University of Toronto (1956 to 1960) for a DDS degree. During those seven years, Bud also worked as a porter on the CN Railway and at Steep Rock Mines in Atikokan, Ontario, while Flora taught school and had the first two of their children.
In 1960, the family moved to Morris, Manitoba, where Bud set up his first dental practice. Bud also become a member of the local Lions Club, the beginning of active community service that continued till his death. Bud and Flora were very active in the local community. Bud was one of the founders of the Big M Stampede, an annual event in Morris that quickly grew to be second only to the Calgary Stampede in its size. And Bud and Flora had three more children while living in Morris.
Bud (and the whole family) were very active outdoorspeople, included hunting and fishing. The call of the outdoors influenced the decision to move to Fort Frances, Ontario, in 1965, where Bud resided till his death. Bud established his dental practice, and eventually built the Fort Frances Dental Centre, where he practiced dentistry till his retirement in 1995.
Bud's passion for helping his neighbours and community was a major focus throughout his life. Much of his energy was channelled through his involvement with Lions at the local, regional and global levels. Whenever there was a perceived need, Bud was there to help out. The Town Centennial celebrations in 1967, the Eye Bank, fundraising for a CT Scanner at the Regional Sciences Centre, the Lions Park and Fountain, Lions Bingo, Meals on Wheels, and a host of other projects - all were initiatives that Bud helped make happen. If a community is created by the commitment and actions of its citizens, Bud is part of the fabric of Fort Frances.
Bud's involvement with Lions always started with his local club. He served in various capacities, including local club president, District Governor, and International Director. He was a strong leader and an active volunteer, stepping up whenever help was needed. Bud was an in-demand motivational speaker and spoke at hundreds of Lions clubs throughout North America and beyond, and received numerous awards for his dedicated service and leadership, including the highest award bestowed by Lions International, the Ambassador of Good Will award.
While much of his time was spent on business and volunteering, the places where Bud was happiest were at the family-built cabin on Red Gut Bay, fishing and puttering in the summer, and at Bud and Flora's winter home in Sun Lakes, Arizona, where Bud covered his yard with citrus trees.
Pallbearers are Kim Danylchuk, Andrew Danylchuk, Brent Danylchuk, Ryan Danylchuk, Mark Danylchuk and Terry Popowich. Visitation was held on Monday, April 29, 2019 at 7:00 p.m., followed by Prayers at 7:30 p.m. both at Green Funeral Home, 600 Reid Avenue, Fort Frances. Funeral services will be held on Tuesday, April 30, 2019 at 11:30 a.m. at the same Green Funeral Home, followed by a reception at the Knox United Church auditorium, 340 Church St., Fort Frances, Ontario.
In lieu of flowers, donations may be made to the Fort Frances Lions Club for their ongoing good works or any charity of your choice.