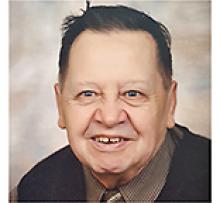 He is lovingly remembered by his nephew Derek (Cathie), their son and Bill’s grand nephew Christopher, his niece Patricia (Don) and sister-in-law Doreen (Jack).
He was predeceased by his mother and father, John and Lily Knipe and brother Jack.
Bill was born and lived most of his life in Winnipeg's North End. He lived in his family home and attended Atlantic-Garden City United Church where, for many years, he coached the youth basketball team. In the late 1940s, with his father and older brother, he was part of their collective dream of having property near a lake. Together they cleared the land and renovated a cabin on Longbow Lake in North Western Ontario. He vacationed there almost every year of his life and "Boulder Shore" remains part of the family heritage.
Bill worked for the Canadian Pacific Railway for 41 years until his retirement in 1992. Not surprisingly this led to his love of trains, big and small.
He was a member of the Orange Order and Manitoba Grand Master in 1982. Bill was proud of his heritage and welcomed the entire Irish Community into his life. His soft spot was reserved for his dogs, and was never without one.
The family would like to thank the staff of the Seven Oaks Hospital Renal Health Clinic for their kindness.
In accordance with his wishes, cremation has taken place.
A memorial service will be held 11:30 a.m. Monday, May 6, 2019 at Atlantic-Garden City United Church.
In lieu of flowers, donations may be made to Atlantic-Garden City United Church, 725 Atlantic Avenue, Winnipeg, MB R2W 0S6.