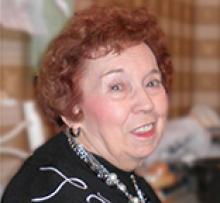 Peacefully at Seven Oaks Hospital, Frances passed away at the age of 91.
She is survived by her sister Margaret Stoddart; children, Kevin (Kathy), Susan (Rod) and Tim; grandchildren, Angela (Michael), Leanne (Michael) Lee, Jenna and Reeanne; and her great-grandchildren, Faith, Trinity, Myles, Carter and Brooklyn.
She was predeceased by her parents, William and Hanna Leitkie; husband Walter; brother Charles Leitkie; sister Grace Laidlaw; son Michael McCaw; grandson Scott McCaw and son-in-law Steven Nemeth.
Fran met Walter at Brereton Lake where they spent many fun summers at the Leitkie family cottage with girlfriends, Betty and Shirley. Fran and Walt were married in Norwood in 1950 in the year of the flood. Her bridesmaids arrived by boat. Together they raised four children. Fran and Walt celebrated their 40th wedding anniversary in Hawaii and years later enjoyed cruising with her sister Margaret and Norman. Fran and Walt were married for 62 years.
Frances followed her passion for singing in the choir at Wesley United Church. She enjoyed bowling at Rossmere Bowling Lanes. Later in life Fran attended MTC theatre with her girlfriends. She worked for the federal government Department of Manpower and Immigration for many years. In her earlier working years, she was employed by Eatons.
Thank you to the staff at Seven Oaks and St. Boniface Hospitals for their care.
A special thank you to the dedicated home care teams.
A private family graveside service will be held at Thomson in the Park Cemetery.
Donations may be made to Heart & Stroke Foundation of Manitoba, 1379 Kenaston Blvd., Winnipeg, MB R3P 2T5.