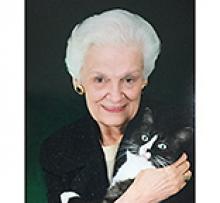 Peacefully on April 30, our darling Zella slipped away from us, surrounded by family. She was 91 years young.
The eldest of four daughters, Zella was born on October 18, 1927. She outlived her husband, Jon Vermeulen; and sisters, Joy
(Rennie) and Lori (Johnson); and is survived by her dear sister Dorothy; and
brother-in-law Doug Gardiner. Although Zella did not have children of her own, she was a greatly beloved aunt and second mother to nieces and nephews across two generations.
With her fierce intelligence and quick wits, Zella tackled the challenges of succeeding in a man's world with courage and flair, daring anyone to stop her. No one could. Armed with her University of Winnipeg degree, she
became a director of programming over a 25 year career at the CBC and president of the Liberal Party of Manitoba. Her speeches were elegant and concise and always in
demand. With her husband Jon, she was also active in the gliding club and together they travelled extensively.
Even in retirement, Zella maintained her sense of style and keen interest in the world. Few people half her age could match wits with her and she delighted in competitive games of bridge with her friends. Her
humour, sound advice and generosity will be long and sadly missed by all who had the
privilege to love her.

Condolences may be sent to
www.thomsoninthepark.com