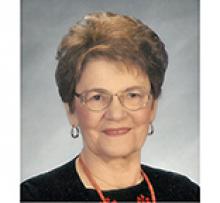 The family is heartbroken to announce the sudden passing of Anna, on Sunday, May 5, 2019.
She will be forever missed by her sons, Stephan (Wanda), Michael, and Bohdan. She leaves behind her sister Olga Klopick (Walter); nephews, Myron Pawlowsky (Susan Boulter) and Christian Klopick (Miranda); grandnephews and nieces, Alexander and Adriana Pawlowsky, and Brianna, Nicholas and Sophie Klopick, plus the members of the Andriechine, Medynsky and Klyuba families. She was predeceased by her husband Mychajlo; sisters, Anastasia Pawlowsky and Mary Smerechuk; niece Alexandra Pawlowsky; nephew Zenon Klopick; and her parents, Ivan and Maria Smerechuk.
Anna was born in the village of Bystrytsia in the Carpathian Mountains of Western Ukraine, the oldest of four daughters. During the Second World War, she was a courier for the Ukrainian Insurgent Army. Life became intolerable in Ukraine during this time and the family deemed it imperative to leave and seek safety, so the Smerechuk family settled in a refugee camp in Austria. It was there that Anna met her husband Mychajlo, and even though he had been hurt in the war, true love conquered all and they were married. They immigrated to Boston, MA, but were not happy until they were able to join the rest of her family in Winnipeg in 1956. In Austria, Anna worked in the refugee camp hospital as a nurse's aide. While in America she honed her English skills so that she was able to land a job at the Health Sciences Centre, and by 1960 she was in a supervisory position. Anna was very active in the Ukrainian community, including leading roles in the Ukrainian Canadian Women's Committee and League of Ukrainian Canadians. In 2018, she was awarded the "Bulava Award" for her contributions to the Ukrainian Canadian community in Manitoba. Her talents did not end there. Anna was an excellent seamstress and was able to produce an expertly crafted garment for any occasion, be it a wedding or ball gown, or a trouser suit. She was very proficient with needle and thread, and her cross-stitched works of art remind us of her. In her later years, she opened a hair salon at home and many ladies were the beneficiaries of her golden hands.
Panakhyda (prayers) will be sung on Monday, May 13, 2019 at 7:00 p.m., at Korban Funeral Chapel, 907 Main Street. Funeral Divine Liturgy will be celebrated by Rt. Rev. Msgr. Michael Buyachok on Tuesday, May 14, 2019 at 10:00 a.m., at the Sts. Volodymyr and Olha Ukrainian Catholic Cathedral, 115 McGregor St., Winnipeg.
The family thanks the staff at Seven Oaks Hospital and the Holy Family Home for their care of Anna during her final months.
In lieu of flowers, donations may be made to Holy Family Home, in care of the Lubov SSMI Foundation, 1085 Main St., Winnipeg, MB R2W 3S1 or lubovfoundation.ca.


Suddenly on May 5, 2019, at Holy Family Home, Anna passed away.
Panakhyda (Prayers) will be sung Monday, May 13 at 7:00 p.m. at Korban Funeral Home, 907 Main Street. Funeral Divine Liturgy will be celebrated by Rt. Rev. Msgr. Michael Buyachok on Tuesday, May 14 at 10:00 a.m. at the Sts. Volodymyr and Olha Ukrainian Catholic Cathedral, 115 McGregor Street, Winnipeg.
A longer obituary will follow on Saturday.