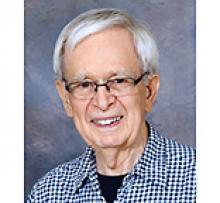 It is with great sadness that we announce the passing of our beloved father, grandfather and great-grandfather, William Arthur Cross.
He leaves to mourn his passing: his four children: Beverly (Laurie), Barbara (Vasillies), Joanne (David) and David (Laurie); eight grandchildren: Rebecca (Dave), Meagan (Derek), Rachel (Serafeim), Ted (Nena), Maria (Vangelis), Robin (Jaclyn), Michael and Natalie; six great-grandchildren: Tristan, Anneka, Madeleine, Hazel, Constantinos and Margarita; brother Arthur; brothers-in-law, Harold and Ed and many other family members and friends. He was predeceased by his dear wife Muriel (nee Jones), granddaughters, Magda and Erin; sister Florence; brother-in-law Ken; and sisters-in-law, Marge and Joan.
Bill was born in Regina, Saskatchewan on May 23, 1926. He grew up in various small towns in Saskatchewan which his father, Rev. Arthur Cross, served as United Church minister. By the time Bill was 18, he had a high school diploma and a degree, A.R.C.T in piano. In 1944, Bill attended St. Andrew's College at the University of Saskatchewan where he began his training as a candidate for the ministry of the United Church of Canada. He received his BA degree in 1947 and was ordained with a Bachelor of Divinity (BD) in 1949. Later that year, Bill married Muriel and the two of them together served pastoral charges in Saskatchewan, Manitoba, Ontario and Ohio, U.S.A. where he completed a Masters Degree (STM, later recognized by Vanderbilt University as a Doctor of Ministry, D. Min). In 2003, Bill, along with Muriel, was awarded the degree of Doctor of Divinity from St. Andrew's College in Saskatoon. In retirement he served with his wife on many pastoral charges in Manitoba.
Bill died on Friday, May 3, 2019 in Lions Personal Care Centre, Winnipeg.
In addition to his family, Bill's passion was for the church which he served in so many different ways including through his incredible gift of music, performance and composition. Bill had a tender heart and a playful sense of humour. He was caring, loving and dedicated. He will be sorely missed by all who knew him. Throughout his life, his faith in the amazing grace of God kept him strong.
A Service of Thanksgiving will be held at Augustine United Church, 444 River Avenue on Saturday, May 18, 2019 at 11:00 a.m. with burial the following week in St. Vital Cemetery.
In lieu of flowers, donations may be made in his memory to Augustine United Church supporting its Future Development Initiative (FDI): worshiping God, feeding hungry people, caring for children, supporting the arts, giving warm shelter on cold nights to the homeless; or other mission-related purposes, the Mission and Service Fund of the United Church or a charity of one's own choice.
Many thanks from the family to all those who in so many different ways cared for him over many years including at Augustine United Church, Trinity United Church, Young United Church, Riverwood Square Retirement Living and his last days at Lions. These acts of kindness will always be remembered.