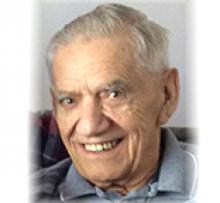 It is with heavy hearts and deep sorrow that we announce the passing of our beloved husband, father, grandfather and great-grandfather, Joe Gregg, on May 11, 2019 at Seven Oaks General Hospital.
Joe was predeceased by his parents, Walter and Martha Grzechowski, brothers, Marshall and Nestor, sisters-in-law, Chris and Sandie, and brother-in-law Alan.
He will be lovingly remembered by his devoted wife of nearly 61 years, Florence, his children, Stephen (Sabine) and Teresa (Jerry), six grandchildren, Ryan (Lain), Courtney (Derek), Mackenzie (Marcus), Brendan, Lauren and Jenna (Charles), and two great-grandsons, Owen and Carter. He is also survived by his sisters, Pauline Couch and Helen Sichewski, and numerous nieces and nephews.
Joe was born on September 29, 1933 in Winnipeg. He met his wife, Florence, on July 21, 1956 at Winnipeg Beach and he knew right away that she was the one for him. They married on June 21, 1958.
He spent his working years at CN Rail as a construction engineering supervisor. He loved all things sports and could often be found at the golf course, the curling club or the hockey rink. In retirement, he enjoyed trips to the casino, cruises, spending time with his grandchildren and participating in the Knights of Columbus' Mixed 10-pin Bowling League, of which he was a founding member.
Joe was a faithful and active member of Blessed Virgin Mary Ukrainian Catholic Church. He also belonged to the Knights of Columbus third degree, St. Josaphat Council and could often be found selling tickets for fundraisers in support of various causes and organizations.
Funeral service will be held on Saturday, May 18, 2019 at 10:00 a.m. at Blessed Virgin Mary Church, 965 Boyd Ave., with Father Volodymyr Bashutskyy officiating. Knights of Columbus will say the rosary at 9:30 a.m. Interment will follow at a later date.
Pallbearers and cross bearer will be Ryan Henzel, Brendan Henzel, Roy Couch, Jason Gregg, Derek Friesen, Charles Bergstresser and Marcus Maneluk. Honorary pallbearers are Ted Foreman and Ian Harasymiw.
The family would like to extend our sincere thanks to Dr. Scott Arnould and the staff at Seven Oaks General Hospital for their outstanding kindness and compassionate care.
In lieu of flowers, donations may be made to Blessed Virgin Mary Church Iconostas Repair Fund, the Alzheimer Society of Manitoba, or a charity of your choice.